Growing up with dyslexia in a community where gangs and drug dealers ruled could have provided plenty of excuses for Idell Thomas-Payne to give up. But a nurturing mother and church made sure she stayed on a level path.

"I had a very fun childhood," Idell recalls. "My mother made sure my brother and I were actively involved in the community and church. I was on every sports team imaginable, not to mention Girl Scouts and karate. I was also in the youth choir, an acolyte, a junior usher, an active Sunday school participant and a part of the youth Bible study class. I loved going to church!"

From birth until age 13, Idell was a member of Camphor Memorial United Methodist Church in Baton Rouge. Her family transferred to Moses Chapel United Methodist in Zachary, Louisiana, because of commuting issues. "I was just as active, if not more active, in Moses," she says. "Because Moses was such a small church, it was everyone's duty to make sure the youth stayed engaged and focused."

Challenges were everywhere in her neighborhood. "Gangs and drug dealers lived right up our street," Idell recalls. "Every year, I watched someone my age fall victim to drugs or gangs. Pregnancy was almost expected of the girls. My mother constantly sheltered my brother and me. While other kids could stay out and play until 8, we had to be in the house by 5."

Struggling in middle school, Idell learned that she had dyslexia. Her grades plummeted. 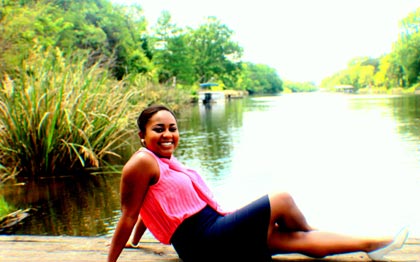 "This only made me want to try harder," she says. "I still remember my mother and counselor telling me that that a learning disability was nothing that I couldn't overcome, even if I had to work twice as hard as others. By eighth grade, I went from [being] an F and D student to a straight-A student. I had to study a lot more in high school. However, I was on honor roll nonetheless."

Idell's church and family have always been her best cheerleaders. "My church members are certainly the reason I excelled at school," she says. "I always wanted to make them proud.

"Moses Chapel always celebrated my accomplishments. Even in college (Northwestern State University of Louisiana – Natchitoches), they would announce if I made the dean's or president's list. My former pastor, the Rev. Glorious Wright, would call and check on me monthly to see how I was doing or if I needed anything. I was in the marching band throughout high school and college. My college was four hours away, so my mother would assemble church members and make a road trip just to come and see me perform."

When Idell started applying to colleges, Wright told her about the World Communion Scholarship. "I was convinced that I would be up to my neck in student loans," Idell says. "However, the scholarship pays for a nice bit of my tuition."

She is grateful for the church's help through the World Communion Sunday offering. "The United Methodist Church has provided me with funds to further my education," Idell says. "Without their support, the debt I would have accumulated would be overwhelming. For others, the support could mean going to college versus not having enough financial support to go. College is far from inexpensive today, and every student deserves a chance to further their education even if they cannot afford it."

"As a future eye doctor," she says, "it is an absolute must to represent Jesus Christ in everything that I do. That is why I would like to move back to the Greater Baton Rouge area and open a Medicaid-accepted practice in low-income or rural areas.

"My community has given so much to me growing up, so it's only right that I give even more to them when I receive my doctorate of optometry." Another goal is to offer free eye exams to children whose parents cannot afford a doctor's visit.

"What better way to show my faith than helping the community who helped raised me?" Idell asks. "I have been unconditionally blessed. I like to inspire others to pursue their goals, no matter how farfetched they may seem. I strongly believe that God makes a way for anyone who has a dream. It's up to us to make that dream a reality."