Shaped by tragedy and grace: Wesley's rescue from fire

What influences does God use to shape us into the people we become?

Our family of origin certainly plays a part, as do experiences with other adults. Events at school and friendships at church sometimes leave a lasting impression. A move to a new community, a national tragedy, and a host of other factors may contribute to our understandings of who we are and what our place is in the world.

For the most part, these events subtly form us. Other times a single event can be so profound that we remember it for the rest of our lives.

The fire at John Wesley's family home when he was just five years old was such an event for him. And likely impacted the way Wesley would lead the movement that was to become The United Methodist Church.

A story in a picture 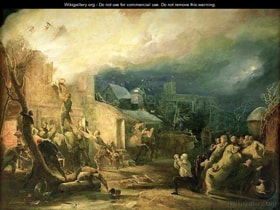 More than 100 years after the fire, Henry Perlee Parker painted “The Rescue of John Wesley from the Epworth Rectory Fire” (1840). This famous illustration matches the basic facts of the family’s description of the fire, but Parker also used the illustration to tell another story.
The Reverend James Everett, a well-known Methodist preacher, not only helped Parker with the idea for the painting, he also posed for the artist’s depiction of the man ready to receive Wesley from the rescuer at the window. Everett, a critic of the Wesleyan Methodist Church of his day, felt the church was not being true to Wesley. His participation in Wesley’s rescue in the painting was a symbol of the role he saw himself playing in the church.
In case anyone missed the not-so-subtle subtext, Everett wrote a booklet sold at viewings of the painting, which drove the point home.
Image courtesy of WikiGallery.org.

We know quite a bit about the fire at the Epworth rectory from letters the Rev. Samuel and Susanna Wesley wrote to family and friends in the immediate aftermath. In these letters, they describe the harrowing events of Feb. 9, 1709.

The Wesley's 11-year-old daughter, Hetty, was awakened from a sound sleep around 11:30 p.m. Burning pieces from the roof of the house were landing on her bed! She ran to find her father Samuel.

Dad was sleeping in an extra room because his wife was ill and probably uncomfortable as she was in the third trimester of a pregnancy.

He remembers hearing someone outside yell, "Fire!" Not knowing his house was ablaze, he got up to investigate. Opening the door to the hallway, he saw the flames.

The burning roof was falling fast and threatening the family's ability to evacuate.

Susanna later wrote to her son Samuel who was away at boarding school, "[N]othing but the thin wall kept the fire from the staircase," their only escape.

The parents, eight children, and a handful of servants needed to leave the house immediately. There was not time enough to dress or take any possessions with them.

Samuel called to Susanna, telling her to run for her life. She and her two eldest daughters, Emily and Sukey, arrived safely in the garden, but not before Susanna's legs were burned.

One servant broke a window and climbed out with Molly and Hetty.

A servant named Betty went to the nursery to get the youngest children. Picking up the little ones, including Charles who was barely a year old, she called to 5-year-old Jacky (young John Wesley) and told him to follow her to safety. When she arrived in the garden, however, Jacky was missing.

Susanna explains that Betty "left Jacky to follow her, but he, going to the door and seeing all on fire, ran back again."

Samuel attempted to get to his son several times, only to be beaten back by the flames that now consumed the staircase. Defeated, he returned to the garden convinced Jacky would not be saved. The family knelt and "prayed God to receive his soul," he later wrote.

Plucked from the burning

"I believe it was just at that time I waked," John Wesley would write many years later.

Remembering it "as though it were but yesterday," Wesley recalls yelling for help and going to the door. Finally, he went to the window where "one in the yard saw me."

With no time to find a ladder, a couple of quick-thinking neighbors did the next best thing. One stood on the other's shoulders and pulled Jacky through the window "just as the roof fell into the chamber [his room]," Susanna reports. 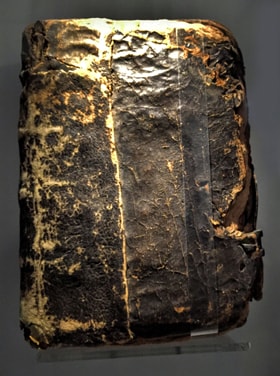 A charred Bible found under rubble on the grounds of the rectory at Epworth may have belonged to the Wesleys and survived the fire. Photo by Joe Iovino, United Methodist Communications.

His improbable rescue was quickly declared a miracle.

"I could not believe it," his father wrote a week after the fire, "till I had kissed him two or three times."

While the family lost nearly every possession they had, they all were saved. John Wesley remembers his father calling out from the garden as the fire continued to consume the family home, "Come, Neighbours! Let us kneel down! Let us give thanks to God! He has given me all my eight children: let the house go: I am rich enough!"

The fire was not God's will, but by God's grace all had survived.

After the fire, Susanna sometimes referred to her Jacky as a brand plucked from the burning, a reference to Zechariah 3:2. She believed God saved her young son for a reason, a lesson Jacky learned well.

Nearly 45 years later, Wesley remembered his mother's words. Lying in bed sick with consumption—a generic term used at the time for any illness that caused a person to waste away — Wesley wrote an epitaph for himself to be used if he didn't recover.

The would-be inscription he penned in his journal began, "Here lieth the body of John Wesley, a brand plucked out of the burning" (Nov. 26, 1753). (Wesley lived another 37 years and this epitaph was not used.)

In summarizing his life, he could have talked about the Oxford Holy Club or the societies he had organized across England. He might have mentioned his heart-warming experience on Aldersgate Street or his missionary work in what would become the United States.

Instead, he summed up his remarkable life with the words his mom ascribed to him when he was five. Here lieth a brand plucked from the burning; a man rescued for a purpose.

John Wesley's experience is unique, but God uses events in all our lives to shape us.

It may be a Sunday school teacher who encouraged your drawings, or a schoolteacher who loved your imagination. Maybe a grandparent gushed about how smart you are, or a parent took pride in the strength of your moral character. It may also be something like a fire, the death of a loved one, or an encounter with a bully.

While we may not be thankful for all the events of our lives, we can give thanks to God for the ways God uses them to shape us into people who love and follow Jesus.

*Joe Iovino works for UMC.org at United Methodist Communications. Contact him by email or at 615-312-3733.
Special thanks to the General Commission on Archives and History, The United Methodist Church for research assistance with this story.