Faced with the possible departure of multiple churches, United Methodist leaders are preparing the smallest denominational budget in more than 30 years.

The General Council on Finance and Administration board, by a 9-7 vote, approved proposing a 2021-2024 general church budget with the bottom line of about $413.4 million.

The finance agency board’s proposal represents about $80 million less than the already historically low budget of $493.8 million that the board initially planned to submit. And it is substantially less than the most recent $604 million budget General Conference passed in 2016.

What this means is that denomination-wide ministries supported by church giving — including seminaries, bishops and most of the general church agencies — will need to prepare for dramatic cuts to their work and potential layoffs. 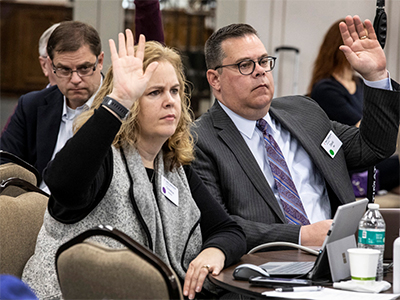 Christine Dodson and the Rev. David Bell, General Council of Finance and Administration board members, raise their hands during a meeting at Scarritt Bennett Center in Nashville, Tenn. The board voted to send the smallest budget the General Conference in more than 30 years.

The current proposal will be the lowest budget submitted to General Conference since 1988, according to the United Methodist Commission on Archives and History.

The finance agency board initially made plans to cut the general church budget in 2018 in hopes of keeping more funds in local churches.

Now, Tang and other board members confronted the possibility that many of those local churches might choose not to remain United Methodist.

In small-group discussions, board members, agency executives and other guests discussed potential sources for those funds. However, the board made no recommendations.

Instead, board members spent most of their March meeting discussing the financial implications of church departures on the remaining United Methodist Church.

Neither the GCFA board nor its staff know just how many churches and members will leave if a plan of separation passes. However, they know that it will affect church giving.

The giving in the U.S. in turn determines the apportionments requested from conferences in Europe, Africa and the Philippines. The U.S. provides 99% of the funding for general church ministries.

excerpt from a story by HeatherHahn, multimedia news reporter, UMNS