Postcards Home from Zimbabwe: 'Makorokoto' is Shona for 'Congratulations'

"Are they dancing in the house of the Lord?"

This is the provocative question posed by God in a song by the Africa University choir.

At the almost six-hour graduation on the campus in Old Mutare, Zimbabwe, I knew the answer was "yes!" God's children were dancing as they celebrated the graduation of 841 students from 26 African nations in 2016.

The ceremony was like most graduations. The fact that it was in Zimbabwe seemed to mean there were fascinating combinations of ancient tribal and well-born British customs and traditions. There were the ululations of women trilling their jubilation, and the speakers' dignified pronouncements of "all protocol observed."

Bishop Marcus Matthews, who served as interim president of the Africa University Board of Directors, was there on the dais. As was the Rev. Kim Cape, general secretary of the denomination's General Board of Higher Education and Ministry.

Shingai Mutasa, a Zimbabwe businessman, gave the commencement address, which was wrapped in thoughts of vision, bravery, strengths, overcoming fear, challenges and choice. 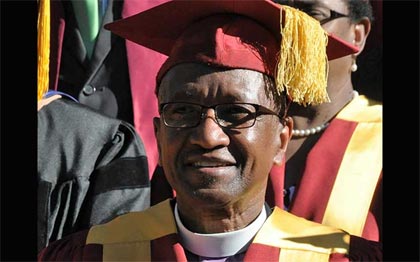 Even more impressive was the speech of Vice Chancellor Munashe Furusa, who is leading the United Methodist-related university into a new age of innovation and entrepreneurship.

Furusa noted that the graduation was being held by the library, chapel and soon to be Fitness Center – empowering mind, spirit and body – making up the soul of Africa University.

A part of me wished that every United Methodist who puts money in the collection plate could experience some of the exuberance of the students celebrating their time at Africa University. Many of them were the first in their families to attend college. Some of the money we pay in apportionments makes this life-transforming experience possible. Maybe you helped buy a textbook, or a microscope, or funded a professor's salary. Maybe it was you, or the person in the pew next to you, who indirectly helped provide that one thing that made the students smile with glee as they put on their mortar boards and posed for photos with their families.

Part-way through the calling each students' name — 841 names — my mind began to drift. Then, I was startled when they called forth a student to receive a Master's degree in Public Sector Management: "Lovemore Warurama."

Lovemore? I had never heard the name, but was enchanted. I checked the program. There were three other Lovemores: Gopozah, Masaure, and Sithole.

There were also two graduates whose first names were Happymore. There was even a Learnmore, Givemore, and More Blessing.

I checked the program again. There were actually five Blessings and one Blessed. There were even graduates marching down the aisle whose names were Beauty, Confidence, Diligence, Lightness, Prayer and Rejoice. There were four Rejoices!

I felt like I was having a real "Call-me-Ishmael," moment. And then they announced the students graduating with the highest grade point average and there he was, too: "Ishmael Gabaza, 3.69."

I also noticed a lot of young men named Tendai. I was told this means "thanks," or "give thanks."

I couldn't think of a better name for the occasion. Africa University, and its graduates, are one of the church's Hallelujahs. It felt like an honor to witness their joy.