For Trinity UMC in Jacksonville, the church is not bound by brick and mortar. The church is in the world outside of the building, in the community, and in Phillips Park, a city park approximately two blocks from the church, where they share a Bible study.

The origins of the Phillips Park Ministry is traced back to a youth ministry Bible Study in 2013, wherein the adult volunteers were encouraged to be in ongoing Bible study. After completing the book, "Radical" by David Platt, they knew they had been challenged and convicted to move the study out of their comfort zone, outside of the church walls to a place where a small contingent of homeless persons resided either under the bridge or in tents in nearby woods.

This group of volunteers moved their weekly study from Tuesday night in the church to 8 a.m. Saturday morning in the park. They brought coffee and donuts, and for the first two or three sessions, it was just them. Then, one by one, two by two, week by week, others came – from the homeless shelter; from the tents in the woods; from the subsidized housing nearby. The donuts transitioned to fast food breakfast, breakfast pastry, and a variety of fruit. The coffee went from two urns to four, and now, six. Food, hot coffee, fellowship, and the Word of God – what a grand way to begin the day! 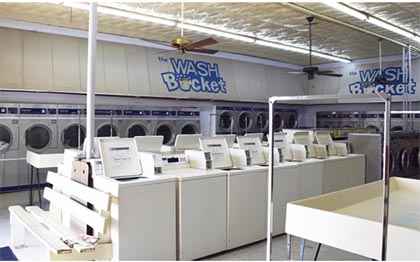 As one might guess, it does not take much fellowship time to learn about the gaps the community people struggle with. Among many challenges is the limited use of the homeless shelter's washers and dryers. Those not in the shelter have no access except through local public laundry facilities. The church now takes over a local laundromat every other Tuesday to fill this gap, bringing rolls of quarters, detergent, softener, color-guards and open hearts and minds. The Trinity volunteers for the laundry ministry are not the same group as those who volunteer for the Bible study, but the interaction is the same. People are people. Spirit is Spirit.

Two years ago, Luis (also known as Cheech) arrived in Jacksonville on a bus from California. A homeless veteran, he spent the first four nights in an empty storage building behind the bus station. He was able to get into the shelter, where he heard about the breakfast Bible study. On his third Saturday in the park, he was pointing to the Bible in front of him and exclaiming, "I'm telling you, there's something in this. Ever since I started coming here, good things started happening." Cheech now has a job and an apartment. He is also the bass player in the Trinity praise and worship band. Things are still not easy for Cheech, but he is far removed from that homeless veteran who was sleeping in a storage building.

Another regular attendee tells the volunteers, "This is how church should be. It's like there is no status here."

Trinity volunteer, Charlie Knox, sums up the purpose of the Phillips Park Ministry – "the goal is to go into the community with service and love, teaching and spreading the Word to folk who are on the margins of the community. We welcome those who will to come into the church (some attend Trinity regularly now and several attend other churches). But more basic to our goal is that we carry the church – Word and Spirit – to where they are."