Pastors get strong advice on fundraising from clergy consultants

Pastors need to think more like fundraisers while keeping their churches focused on their missions.

That was the overriding theme of the 2018 Orders & Fellowship meeting, Jan. 17-19 at Younes Conference Center in Kearney.

Two nationally recognized experts on fundraising from Horizons Stewardship – Horizons founder, the Rev. Dr. Clif Christopher, and the Rev. Dr. Mike Slaughter challenged the approximately 550 clergy in attendance to think better financially, both by what they share from the pulpit and in how they relate to their parishioners.

"Preachers don't like to talk about money," Christopher said. "It's time that we change our way of thinking and the way we do business."

Churches, both Christopher and Slaughter said, face more of a challenge than ever as they compete for dollars with colleges, hospitals and other nonprofit charities.

"They're listening to your sermon," Christopher told the clergy of their parishioners, "then they're choosing to give elsewhere."

Christopher challenged the long-held philosophy that pastors should not see who in their congregation contributes financially to their churches and how much. He said many congregations have put rules in place to prevent the pastor from knowing such information.

"That is dumb," said Christopher, an ordained United Methodist pastor. "It's stupid, and there's no reason for it." 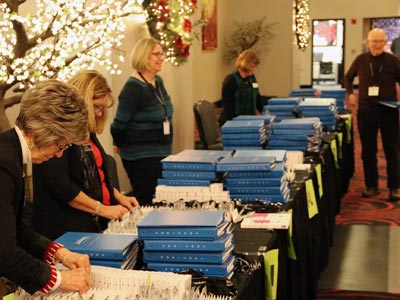 In his presentation "The Heart of the Matter," Slaughter said that he preached on stewardship at Ginghamsburg – which grew from 90 members to one of the largest United Methodist churches in the country during his time there – all year long.

"You don't have to be afraid to preach on money," Slaughter said. "It is the heart of discipleship."

"For us it all goes back to Jesus," he said. "Be rock-solid about your mission."

In his presentation "Developing a Year-Round Generosity Plan," Slaughter encouraged the audience to emphasize that stewardship should "not be just one week or one month."

In his presentation "Minister as Financial Leader," Slaughter said pastors should get their own finances in shape before preaching and teaching about the subject.

In his presentation "Fundraising Principles," Christopher said churches must be operated like other nonprofit organizations.

Christopher said churches should beware of professional fund-raisers who seek to keep a percentage of the money raised. Instead, he said, seek out companies that charge a flat fee. A consultant could end up charging anywhere from one-half of a percent to 5 percent of all the funds raised.

A consultant should be hired unless the pastor has vast amounts of fundraising experience, he added.

In his final presentation "Planned Giving," Christopher said this kind of giving accounted for more than $30 billion in 2016, adding that figures show 10,000 people turning 65 every day – 3.6 million a year – and that bequests in wills have become an increasingly favored way of contributing.

Christopher recommended churches employ year-round efforts to educate parishioners of how they can tithe their estates upon their deaths.

United Methodist Church Giving is about people working together to accomplish something bigger than themselves. In so doing, we effect change around the world, all in the name of Jesus Christ. To read stories about the generosity of United Methodists click here.