Africa University's influence is spreading across the continent and around the globe through partnerships with government agencies, non-profits and corporations — nearly 25 years after The United Methodist Church founded the university in Zimbabwe.

While the new partnerships are important, James H. Salley, associate vice chancellor for institutional advancement, stressed that the university owes its existence and incredible growth to the support of The United Methodist Church — support that is still crucial.

The university, which celebrates the quarter-century mark in 2017, has always received strong financial support from the church through the apportionment fund, special campaigns by annual conferences, individual donors, and more.

Even as Africa University expands its support through non-church philanthropies and organizations, a campaign in the church to increase the university's endowment to $100 million is underway. 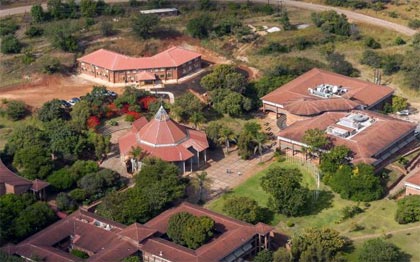 "The prayers and the gifts that United Methodists are investing through the Campaign for Africa University —  an effort to raise $50 million for endowed scholarships, new program initiatives, and capital projects — will certainly strengthen the university's role in shaping Africa's future through changed lives and communities," said Salley, who heads the development office in Nashville.

The growing number of friends and supporters who are not church-related, though, are a boon to the institution's pan-African mission, said Andra Stevens, the director of communications for the Africa University Development Office.

Turns out that Africa University is a good fit for many different types of organizations. Some of those are quite large, such as the United States Agency for International Development and Chevron, a multinational energy corporation active in more than 180 countries, while others are smaller companies that have developed relationships with university staff.

"A big selling point for everyone who gets into a relationship with Africa University is the potential impact to a continent," said Munashe Furusa, the vice chancellor. "You have 31 of the 55 countries in Africa that have been represented on the campus. It gives you the possibility of being involved in change leadership across borders and across Africa."

Stevens emphasizes it's not just the large corporate partnerships that make a difference. One partnership is the affiliation with the Hansens' Vikings Scholarship Fund based out of Toronto, Canada. Between 2002 and 2015, the fund donated close to $60,000 to support students at Africa University. Five students have completed undergraduate degree programs at the school because of these scholarships.

Patrick Patterson, who leads the Hansens' Vikings Scholarship Fund, said the expectation is that Africa University continues to deliver the outstanding results that they have achieved through exceptional professors and educational programs.