In the small village of Kaliki, men, women and children are on their feet, dancing, accompanied by drum rolls, as an international World Council of Churches (WCC) Pilgrim Team arrives. The pilgrims are given intricately-woven crowns of grass and flowers and their faces are painted with traditional patterns. The ceremony, which takes place in silence, culminates in a poetic new name for the visitors: "offspring of the betel nut.”

The pilgrimage to Kaliki is one touched with adventure. It takes three hours to drive from Merauke, in Papua, Indonesia, through the flat landscape, where one rice paddy is aligned with next. After the extremely warm welcome, Mateus Kaeze, the village chief, soberly describes the situation of the indigenous Papuans who live here.

He lists their serious problems briefly and succinctly: land grabbing, environmental destruction, lack of access to health care and education, and hunger. "Our forests are being damaged and are increasingly disappearing," he says. "But nature is our livelihood and we are responsible for protecting it.”

He is also concerned about education for the children and, finally, completion of the road to the village. His words contain no blame, but at the end there is an urgent appeal for assistance to the WCC delegation. 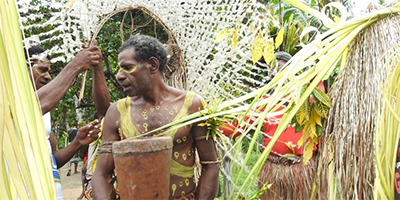 The WCC delegation is received ceremoniously in the village of Kaliki with traditional customs. Photo Credit: Marion Unger/WCC

George Pelasula, who accompanies the delegation, is also outspoken. He is a pastor in Baidub, a community of 46 families spread over two villages. "We are trapped between two palm oil plantations," says Pelasula. "The forest was cut down for them." Each of the plantations spans over one hundred hectares; one of them is operated by a company from Malaysia.” The other belongs to a national Indonesian political appointee, the pastor explains.

His parishioners are hunters and gatherers. Before the palm oil industry interfered in their lives, they cultivated sandalwood and processed crocodile skin into bags. The flour of sago palms was their most important staple food. Then companies bought their land at bargain basement prices.

"People do not even know what they are signing when a contract is presented to them," says Pelasula. “The sellers do not even receive a copy of the contract. How can they take legal action against suspected fraud?”

"Our forest is not a forest, it is a political issue," says Pastor Jimmy Sormin of the Communion of Churches in Indonesia. The prohibition law dates back to the reign of dictator Suharto, who summarily claimed the forest as state property. Hunting is no longer permitted there, and fishing is forbidden in any case because the rivers and lakes are heavily polluted or even poisoned by waste water from the factories.

Indigenous Papuans are seeing their chances for a life in dignity dwindle. They worry about the future of their children. If there is a school in their village, there is a shortage of teachers, who are civil servants.

"Some children cannot write and read even after six years of primary school,” Pelasula says. No wonder, he concludes, that a profound depression has been spreading among the indigenous Papuans for years.

Pelasula faces its consequences day after day as he struggles as a pastor against increasing domestic violence among his parishioners. He notes, "They are simply desperate and do not know what to do with their anger."