Kay Oursler speaks with urgency when explaining about Sawata, a working/teaching farm the septuagenarian is developing in her adopted country of Tanzania.

As she details the tasks of meeting with community and church leaders and completing grant proposals and other fundraising activities, Oursler quickly puts her immediacy in context.

“This is probably my last big project,” says Oursler, who celebrated her 78th birthday this year. “I don’t want to give this one up.”

Let’s be clear. Oursler, grandmother to eight and great-grandmother to 11, could claim a well-deserved retirement today and still close up an impactful ministry career.

Oursler has already been part of a number of “big” things, life-altering ventures for thousands in the east African country, including founding an orphanage, the Sunrise Children's Home, building a library and a small health clinic, adopting her son, Noeli when the now-19-year-old Tanzanian native was 6, and raising and educating 21 Tanzanian orphans. It should be noted that this work only started when Oursler, at age 65, found herself newly-divorced after a 46-year marriage which had been spent taking care of her children and her family’s home.

In the same matter-of-fact stance one may infer that Oursler takes on all of her life situations, the Arkansas native, at that time, did what probably few in her situation would do: she joined the Peace Corps. And that’s how Oursler, who now answers to her Kiswahili name of “Bibi Kay” (“Grandma Kay”) found herself in Tanzania.

Fast forward 13 years and Oursler has passed operation of the orphanage, as of this past February, to a young American missionary couple, giving herself new chunks of time to work alongside Njombe, Tanzania, leaders to get the farm going. She finds that she now has time to socialize, she says, outings that have less to do with eating and chatting than with her strategy for Sawata. Wednesday nights hanging out with ex-pats and locals have yielded a partnership with a Swedish-owned local lumber company, a renewed association with the local milk factory and favors from friends this savvy business woman plans to call in when the time is right.

Oursler’s vision for the working/teaching farm focuses on an undeveloped 63-acre tract that Sawata has owned since 1994 near Njombe in the Magoda Village. Where most will see parched dirt and scraggly weeds, Oursler sees the foundation of an administration building, dormitories, a cafeteria and kitchen, and outbuildings for livestock, all teeming with young people who will be learning to tend to animals and crops. 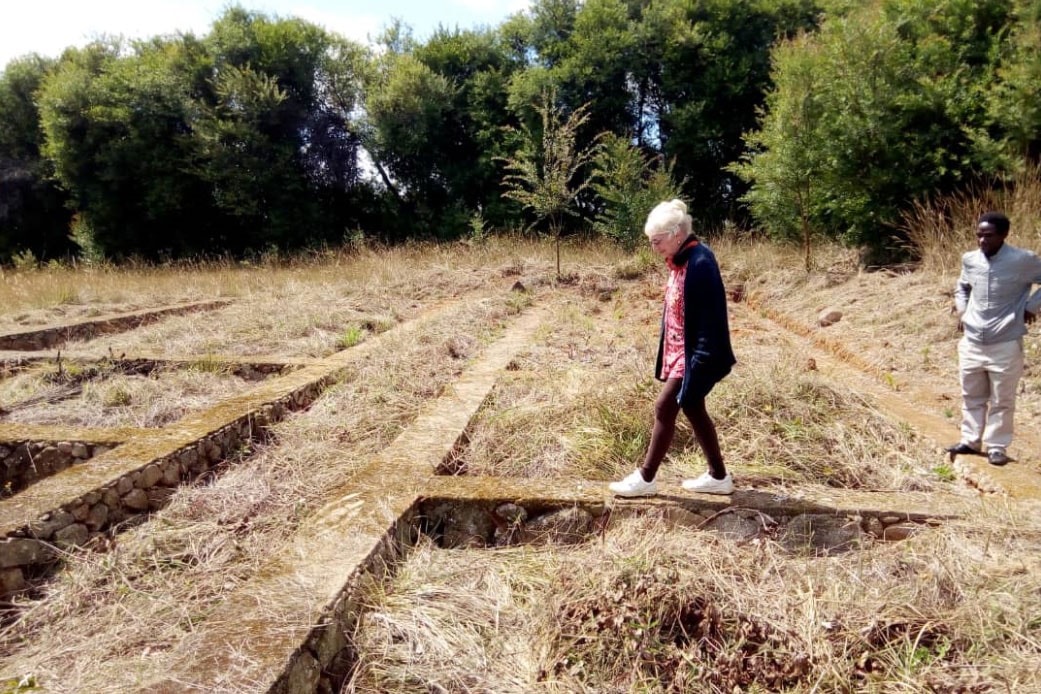 Kay Oursler (left) and a friend survey the land where Sawata will be built. Photo courtesy of Kay Oursler.

“The farmers don’t know how to take care of their cows,” Oursler says of the current situation. “They don’t know how to de-tick and de-worm or how to get salt blocks. We will teach the farmers how to improve the milk supply for their cows by using better feed. I know all of this because I learned it while operating the orphanage, but they don’t. So this is a perfect situation.”

In addition to caring for cows, the students will learn all aspects of animal husbandry and gardening. She also plans for women to learn to weave colorful mats out of plastic bags.

“My goal is to get these people employed and making money to survive,” Oursler said. “We can keep giving them money, but that isn’t the solution.”

Oursler has the vision, the knowledge and the strategy to bring Sawata to fruition. The only missing piece, she says, is the financial one, a fact that does not deter this determined woman.

Trusting in God is a trait that Oursler’s friend, Akiba Mgaya, has witnessed in Oursler since the two first met in Tanzania 13 years ago.

“Kay is living out her faith in the work she does,” Mgaya says. “She has a giving heart, and, in my opinion, Kay’s most admirable quality is that she respects everyone and loves people. And the people love her. She is a woman of the people.”

When discussing Sawata, Mgaya praises Oursler’s efforts, explaining multiple ways the new endeavor will benefit his fellow Tanzanians, including offering people an opportunity to establish their own businesses, which will create income that will result in a better quality of living.

“I am sure that the work she is initiating will succeed, because Kay has a vision about everything that she does,” Mgaya says. “And the interesting thing is that if someone has a problem, then Kay takes that on as her problem and she is especially good at finding a solution and, with Sawata, the whole community will benefit.”

*Crystal Caviness is a senior public relations specialist at United Methodist Communications. She can be contacted at [email protected] or at 615-742-5138.