"My involvement with CONAM"

I joined The United Methodist Church on November 6, 2010, when I married Dennis Wack. The following autumn our new DS, Anita Powell, insisted that our church, Evansburg UMC, designate a representative to Native American Ministries. Since I had an abiding interest in Native Americans, I volunteered.

Then began a quest to find out what that job entailed. After several phone calls, I connected with Sandi Cianciulli, the current co-chair of our conference's Committee on Native American Ministries (CONAM). At that point, CONAM had just been revitalized. Sandi invited me to the next CONAM meeting where Dr. Christopher Kurien, Director of Connectional Ministries, asked if I would like to join CONAM. I agreed and Christopher submitted my name to the nominating committee, approved at Annual Conference 2012.

Since that time CONAM has become more organized, and we have clear directions for the local church representatives, which does not involve joining the conference CONAM.

Our current CONAM is full of passionate, committed people; and we are involved in many exciting ventures to raise awareness of and to minister to and with Native Americans both in our area and across our country. 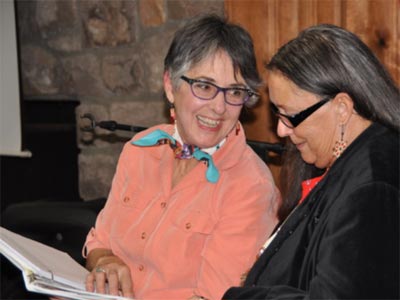 In the past 5 years CONAM has held classes at many events, such as Tools for Ministry in several districts and the Central District's Intensive Training and Laity Academy. At Annual Conference 2015 we organized a presentation to honor the children who died and are buried at the former Carlisle Indian School (now a U.S. Army barracks and site of the War College).

We sponsor each year two Native American programs offering worship, teaching and fellowship at Camp Innabah since. CONAM has also sponsored two bus trips to Carlisle for presentations and tours of the former Indian Industrial School. And at the 2016 Northeastern Jurisdictional Native American Ministries Committee meeting we sent a letter of support to Standing Rock.

At Evansburg UMC we have held a Native American Ministry Sunday every year since 2012. In February 2013 we had a social event with Spirit Wing, a Native American entertainment/education group. Attendees were taught Native dances as well as other cultural information. It was well-attended and lively. During Lent in 2016 we offered a class based on Thom White Wolf Fasset's book, Giving our Hearts Away.

Sherry Wack, Co-chair of the Committee on Native American Ministries