Monday Meals Ministry more than the sum of its parts

The coffee’s on in the Landes Center in Anadarko every Monday from 7:00 to 9:00 a.m. In less than a year, over 6,000 meals have been served through Monday Meals, a lay ministry of Anadarko-First United Methodist Church.

The first time the doors opened in April 2018, the church expected 10-20 people for breakfast; instead, around 40 people showed up. Today, the average is 80, though attendance can be as high as 114 people.

The miracle of Monday Meals is that no single person is responsible for the high attendance. People across the community come together on Monday mornings at the Landes, including volunteers from Anadarko-First, friends of church members, and members of other local churches. 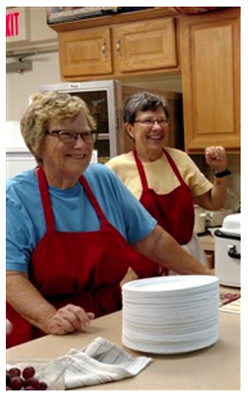 Biscuits, pancakes, or both? Louise Foster and Diane Powell greet guests at the counter during Monday Meals. Photo by Paulette Henderson.

Friends from several local churches show up hours before the doors open to spread peanut butter sandwiches and pack them into brown bags for people who will need lunch. One local resident who cannot physically participate on Monday donates five dozen muffins every week, and her husband delivers them. People have been known to check the refrigerator in the Center, and finding it spare, donate a ham. Guests carry out meals to shut-ins.

In November, Monday Meals became one of the most recent recipients of the “New People, New Places” grant, a Connectional Opportunity administered by the Oklahoma Conference of the Methodist Church. The grant is designed to encourage people to reach across their borders, comfort zones, and demographics. That description is real to the friends who share Monday Meals.

Monday meals has become more than the sum of its parts. The Indian Health Service provided flu shots on site at the Landes Center on two recent Monday mornings. When people heard that Monday Meals was interested in finding new and gently used cold-weather clothing, donations of coats, gloves, and socks began to show up. Dry socks are as popular as biscuits and gravy. The Anadarko High School Student Council built and gifted a Blessing Box, a place where people can leave and take non-perishables. It is installed beside the doors of the Landes Center.

Felecia Hensley, pastor of Anadarko-First, sums up the ministry this way: “The goal of this ministry is to be a safe place, to establish relationships across class, culture, and economic lines. If we cross those lines, then that opens the doors for God to meet people’s needs, through us.”

The two questions most asked about Monday Meals are “How does this work?” and “What do you have to do to get a plate?” The answer to both questions is, “Show up.” People who were once invisible to each other have made friends.