In November 2017 the president of Meharry Medical College made the decision to partner with HCA. Students will now be attending classes across town at Southern Hills Medical Center. School officials call the agreement with a hospital owned by Nashville-based HCA a "historic" milestone for the institution, which specializes in training physicians of color.

Meharry Medical College is one of the black colleges supported by the Black College Fund which provides financial support to maintain solid, challenging academic programs; strong faculties; and well-equipped facilities.

Right now, Meharry students spend their third and fourth years at General Hospital, which is on Meharry's campus in a tower owned by the school. But because business is so slow at the cash-strapped facility, operating at one-third of capacity, Meharry had to send most students to other hospitals around the region to get the necessary experience to become a doctor. 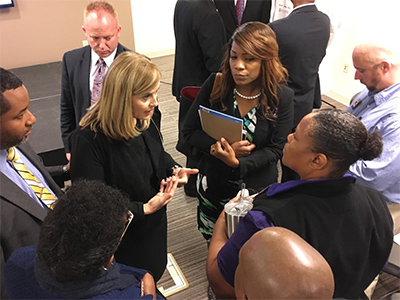 An employee confronts Nashville Mayor Megan Barry after announcing her plans to restructure General Hospital, asking her why the plan has been kept secret until now. CREDIT BLAKE FARMER / WPLN.

At this point, Meharry is not planning to move from its current North Nashville campus. But president James Hildreth says having all his students at one site, run by the largest investor-owned hospital chain in the country, is a step up from the current situation.

"We're committed to the community, committed to the patients," he told reporters Thursday. "But my first responsibility — and the most important one I would say — is training future generations of physicians."

HCA, a for-profit enterprise, owns other medical centers that are considered teaching hospitals, like Tulane Medical Center in New Orleans. In all, an estimated 3,000 medical students are already working in HCA facilities around the country.

"If we can be part of educating physicians for the future, we want to be a part of that," CEO Milton Johnson said. "It will also help solve a physician shortage for HCA in this community down the road."

At the same time of this announcement, former Mayor Megan Barry revealed a restructure for Metro General Hospital because the facility has been in financial trouble for years, and the city has pressured it to create a sustainable model and attract more paying patients. In recent years, the hospital has barely made payroll, much less launch a marketing campaign.

She blames the intense competition between Vanderbilt, Saint Thomas and HCA — which treat many more uninsured patients than General Hospital, despite its mission to provide indigent care.