When missionaries David and Elizabeth McCormick first arrived in Maxixe, Mozambique, to begin work with Chicuque Rural Hospital (Advance #3021770), the hospital was straining to meet the needs of its patients. The grounds, buildings, and even some medical equipment and medicines had extensive damage from Cyclone Dineo in 2016. David McCormick took over as the hospital administrator, working with the United Methodist Health Board of the Mozambique Episcopal Area.

Chicuque Rural Hospital is a 135-bed facility with 20 more beds available for various smaller clinics operating in surrounding districts. These clinics work alongside the larger Chicuque Hospital and refer cases they are not equipped to handle. Chicuque Hospital is the only level-two facility in the area, which means it has the capacity for surgery, inpatient care, high occupancy maternity care and pediatrics. The facility also provides consultations and outpatient services for the community. 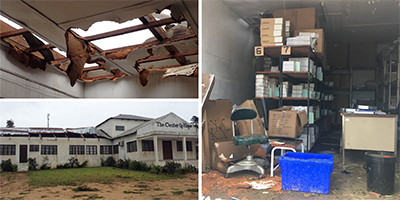 Founded by Methodist missionary, Dr. Charles John Stauffacher, in 1913, the hospital was nationalized by the government of Mozambique in 1975. Today, The United Methodist Church in Mozambique works in partnership with the government to meet the health needs of the population in the Chicuque area. Primarily, the church is expected to provide for gaps in the government service, which may mean filling in with additional services, equipment or staffing needs. The facility’s importance to the health of the rural population in Maxixe means that it must meet a basic standard of care. Over the last two years, the hospital has improved its capacity to serve patients as part of the United Methodist Abundant Health Initiative (Advance #3021770)

A series of grants from Global Ministries’ Global Health unit completed in phases targeted key facilities for reconstruction. Over the last two years, Global Health grants, totaling $554,512, have been used for medicines, hospital reconstruction, Imagine No Malaria projects and settling a long-standing case of salaries in arears. This has helped the hospital reboot for a fresh start.

“Through training and supervision and with the help of the Health Board, we directed the clinical and administrative staff of 298 employees and filled in gaps that the Mozambican government was unable to meet,” David McCormick explains. “We leveraged the United Methodist partnership to fill the needs. Direct support from Advance giving also helped United Methodists fill in the gaps.”

Finding ways for United Methodists to come alongside and partner with others in their health work has been a major part of the McCormicks’ work in Mozambique. On both large and small scales, they acted as conduits to bring congregations and ministries together.

“I can say, in the case of Chicuque Hospital, United Methodist gifts critically matter – they are used to save lives,” David said.

excerpt of a story by Christie R. House, senior writer and editor for Global Ministries.