It is not customary to think about loose change as life changing, but it can be. Gathered together, coins can make quite the difference, as the members of Sandpoint Community United Methodist Church (UMC) have found.

The Seattle-based church made a gift of $500 to Africa University in honor of its 25th anniversary. The gift, which represents one month's change collection, is enough to provide health insurance for two students for a year or on-campus housing for one student for a semester.

"I think that the congregation and others need to know about the challenges Africa has, and the fact that Africa University is providing an excellent opportunity for its graduates to meet those challenges," said Mrs. Phyllis Ferguson, a longstanding member of the Missions Team at Sandpoint.

Sandpoint Community UMC invests in Africa University yearly through its apportionment giving. It is a small, mission-minded church whose members include those who grew up in the Pacific Northwest, long time Seattle residents, and people from all over the U.S. who now call Seattle home. The congregation ranges in age from 1 to 101, with an average Sunday worship attendance of 65-70, and is looking forward to celebrating its 75th anniversary in 2019. 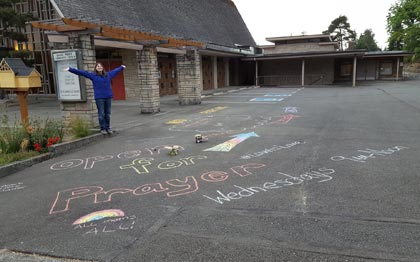 Mrs. Ferguson nominated the university for additional support through a weekly program called "Melodies of Compassion." Members of the congregation put their loose change into offering plates each Sunday to benefit ministries and organizations that are chosen by the Missions Team.

As Jane Stevens, the Missions Team leader, puts it, "the noise the coins make as they are dropped into the plates is the 'melody' we are making!"

Sandpoint Community UMC's pastor, Rev. Janelle Kurtz, says that the congregation's passion for honoring history and legacy as living stories is one of the many characteristics that she loves.
"This is a place where the community gathers and a place where we do our best to respond to the needs of the community," said Rev. Kurtz. "This sense of community is a driving force for our missional investment…(it) is reflected in the missions team (and our Melodies of Compassion) as we try to alternate between local, regional and global missions."

Ms. Stevens' father, Rev. William V. Stevens—a pastor for more than six decades—started the Melodies of Compassion program while serving at Trinity United Methodist Church in Beaver Dam, Wisconsin. He chose charitable programs monthly that needed funding and each week he would give a little information about the charities from the pulpit, hoping that the congregation would learn about them and perhaps continue supporting them. The program was a great success, and Rev. Stevens introduced it to three smaller churches that he served in retirement.