As General Conference delegates arrived in Portland, Oregon, many knew that over 100, close to 10 per cent, of the petitions in front of them were asking for changes in statements related to homosexuality in The Book of Discipline.
In the end, though, the full conference considered none of them – after voting on May 18 to accept the recommendation of the Council of Bishops to "pause for prayer" and stop debate until a commission can study the existing regulations and make recommendations.

In "An Offering for a Way Forward," the bishops responded to the delegates' request a day earlier to lead a "stuck" General Conference in a way that would preserve unity and address the conflicts around church laws related to sexuality.

"We accept our role as spiritual leaders to lead The United Methodist Church in a 'pause for prayer' — to step back from attempts at legislative solutions and to intentionally seek God's will for the future," said Bishop Bruce Ough as he presented the recommendation to the delegates. 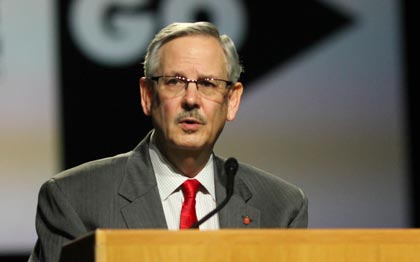 Ough, president of the Council of Bishops, said the commission would examine every paragraph in The Book of Discipline related to human sexuality and possibly recommend revisions. The membership will represent United Methodists on four continents as well as the varied perspectives in the church.

The offering also raised the possibility of a special General Conference in 2018 or 2019 to act on the commission's recommendations.

Other bishops stood behind Ough as he read the statement, which he acknowledged did not receive the unanimous vote of the council. It did have overwhelming support, he said, adding that unanimity is not required for unity.

It was the second time in as many days that Ough addressed the delegates in their legislative sessions, an unusual role as bishops have neither voice nor vote in General Conference and may not address it without permission.

Presenting the Council's recommendation, Ough told the delegates, "As far as we can discover, this is the first time that a General Conference has ever made such a request of the Council of Bishops, and we have accepted this request with humility."

While presenting their recommendation, Ough said the bishops continue to hear from many people "that our current Discipline contains language which is contradictory, unnecessarily hurtful, and inadequate for the variety of local, regional and global contexts."

"Our church is struggling, and there are voices all around the edges — just a variety of voices," Howard told UMNS. "What I'm afraid of is that if we don't pause and allow the Spirit to fill the space, then we will fracture."

Like many in the room, Howard believed he had secured such a pause.