United Methodist women in Côte d'Ivoire have seen their dream of opening a processing plant for a popular local dish become a reality thanks to a $200,000 grant from United Methodist Committee on Relief, UMCOR.

The women will be making attiéké, a traditional Ivorian dish made from cassava semolina (flour) that has become highly regarded beyond the borders of Côte d'Ivoire and Africa. It is similar in texture to couscous.

“This is an opportunity to produce attiéké — in quantity and quality — a highly valued local commodity that could contribute to the national economy,” said Bishop Benjamin Boni of the Côte d’Ivoire Episcopal Area who joined the women in celebration on Jan. 11.
Members of United Methodist Women representing the 25 districts of the Côte d’Ivoire Conference of The United Methodist Church gathered at the entrance of Attingué, a village in the commune of Anyama (30 kilometers north of Abidjan), where they laid out a vast piece of land as a temple for the occasion. 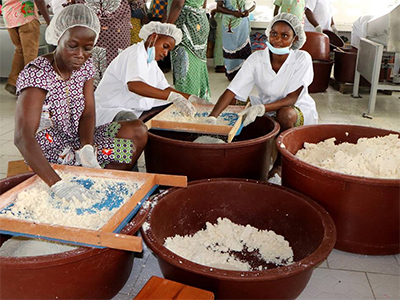 The delegation included Lorrie King, director of Sustainable Development for the United Methodist Committee on Relief, as well as representatives of the Ivorian government and the chieftainship of surrounding villages.

A new green building on 400 square meters of land houses the semi-mechanized production unit. The opening of the plant is a tangible result of the conference’s focus for the past two years on the theme “Church and Food Security: You Give Them Something to Eat” (Matthew 14:16).

Boni praised the long-standing commitment of United Methodists to fight poverty, and he called on young men and women who are jobless to join the initiative.

Simon Nathan Koffi, executive director of the United Methodist non-governmental organization le Réservoir de Siloé, helped implement the project, which begins with the harvesting of the cassava crop and ends with the marketing of the finished product.

The production plants will work together with the Tabitha Hope cooperative, which was created in June of 2019 to bring together the women of the Côte d’Ivoire United Methodist Church involved in the attiéké and rice projects (a similar project in some rice-friendly districts).

King said the women are role models for other United Methodists.

“We've been waiting a long time for (the attiéké) project to come to fruition. Thank you for not making us dream in vain,” said Michel Kouakou Kouakou, divisional officer of Anyama.

After the visit to the premises and before giving the final blessing, Boni invited those present to eat healthy.
“It is time to consume good attiéké,” he said.

excerpt from a story by Isaac Broune, directs French news for UM News and is based in Abidjan, Côte d'Ivoire.