General Conference organizers have determined enough improper voting likely took place at the 2019 special session to nullify a key vote on how congregations can leave The United Methodist Church.

The Commission on General Conference — meeting behind closed doors during its August meeting — reviewed an investigation that found “credible objective evidence” of four ineligible people casting votes using the credentials of delegates who were not present.

Altogether, the commission spent more than three hours of its August meeting, closed to outside observers. At the conclusion of the meeting, despite earlier promises to report out its work, the commission did not report any details of its decisions.

“When you are dealing with allegations, they may or may not be factual in nature so you don’t want to do any defamation of anyone’s character by inappropriately saying certain things,” said Bishop Thomas J. Bickerton later told United Methodist News. He is the Council of Bishops representative on the commission and leads the New York Conference. 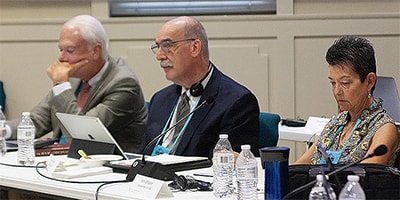 Members of the United Methodist Commission on General Conference listen during a presentation at their meeting in Lexington, Ky. From left are: Bishop Thomas J. Bickerton, the Rev. Gary George and Kim Simpson. Bickerton is the Council of Bishops representative on the commission, George is secretary and Simpson is chair. Photo by Heather Hahn, UM News.

Ultimately, the commission wants the Judicial Council — the denomination’s top court — to weigh what the fraudulent voting means for the legality of the disaffiliation legislation.

The investigation findings come more than five months after a pivotal special General Conference, called by the Council of Bishops to try to resolve the longtime denominational debate.

The invalid vote count was enough to cast doubt on the disaffiliation legislation that allows, with limitations, congregations to leave the denomination while keeping church property.

Because voting at General Conference is supposed to be confidential, the investigation did not determine whether the ineligible voters favored the substitution or not. But the possibility that invalid ballots might affect the result of a vote invalidates the entire ballot.

“Having found sufficient evidence that there were invalid votes that potentially affected the result of the vote, the Commission determined that the vote to substitute the minority report is void,” the commission leadership said in a press release.

With the substitution, the disaffiliation plan went on to pass by 420-390. It is now listed as an addendum to the Book of Discipline, the denomination’s policy book. Seven congregations in Mississippi already have used the legislation to exit the denomination.

The investigation also raised the possibility of irregularities in how delegates were selected and instructed to vote. The commission, behind closed doors, voted to refer these allegations to the Council of Bishops for further investigation.

Behind closed doors, the commission developed new registration and credentialing procedures to safeguard against unauthorized votes at future gatherings.

“We have to maintain strict confidentiality or the integrity of those further investigations goes into jeopardy,” says Bishop  Thomas Bickerton.