United Methodists from around the connection immersed themselves in Native American culture this week during a special event hosted by the Oklahoma Indian Missionary Conference. 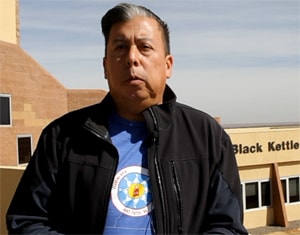 The Rev. David Wilson, superintendent of the Oklahoma Indian Missionary Conference, discusses the March 7-11 immersion experience, which included a visit to the site of the Washita Massacre in Cheyenne, Oklahoma. Watch video.

Twenty-three participants visited Native churches, communities and historical sites that have influenced ministry in the conference.

"The experience of meeting people face-to-face and listening to Native peoples' stories has a tremendous effect on the outlook of participants and helps them understand who we are as Native people and the importance of our presence in The United Methodist Church," said the Rev. David Wilson, Oklahoma Indian Missionary Conference superintendent.

Wilson said he was encouraged to create the immersion opportunity based on the results of a study by United Methodist Women that found people wanted to know more about the missionary conference. The "Act of Repentance Toward Healing Relationships with Indigenous People" held during the 2012 General Conference also sparked an increased interest in Native ministries.

"The wonderful piece about the Acts of Repentance is that there are many who are still actively pursuing what that means to The United Methodist Church," said Wilson, adding he was surprised to have participants from Texas, New Jersey, Arizona, Nebraska and New York attend the event. 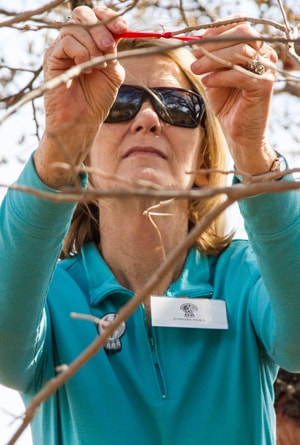 Cynthia Rives ties a prayer ribbon to a tree in honor of those killed during the Washita Massacre. Rives was representing United Methodist Women at the Oklahoma Indian Missionary Conference immersion experience. Photo by Ginny Underwood, UMNS.

United Methodist Women is leading the charge by sending both staff and board members to participate in the two immersion experiences offered so far.

"Our understanding is the Act of Repentance has fruit," said Cynthia Rives, a UMW board member who participated in the immersion event. "We, as United Methodist Women, want to change in some way. We want to be faith, hope, love in action. I am looking and praying about what that action might be regarding Native Americans in the denomination."

The immersion experience included a trip to Cheyenne, Oklahoma, and the site of the Washita Battlefield, also known as the Washita Massacre.

The visit is a continuation of the story shared at the 2012 General Conference, which focused on the 1864 Sand Creek Massacre led by Col. John Chivington, a Methodist minister. Chivington's cavalry attacked and destroyed a Cheyenne and Arapaho encampment, killing 160 people, mostly women, children and the elderly.

At the time, Black Kettle, the village leader, was negotiating peace agreements; he was not present during the attack. The Sand Creek Massacre led to a massive public outcry as well as months of retaliatory raids by Cheyenne, Arapaho and Lakota warriors.

Four years later, the federal government launched a winter campaign to stop the raids and to cripple resistance. On Nov. 23, 1868, Lt. Col. George Armstrong Custer led the 700 7th U.S. Calvary to the Washita River valley to attack the some 6,000 Cheyenne, Arapaho and Kiowa who had laid winter camps along the river.

Coincidentally, the first village they encountered was that of Black Kettle, who had tried diligently to avoid conflict. The attack on the village took place at dawn and within two hours, 30 to 60 Cheyenne were killed, including Black Kettle and his wife.

"This was a massacre, a genocide," said Jonathan Campbell from the Greater New Jersey Conference, who participated in the immersion event. He said he hopes the church will learn a lesson from Black Kettle about making peace.

"The United Methodist Church needs to take seriously its call on itself to be in an Act of Repentance. We need to be more vocal about making sure the Native Americans are treated justly in the society and amends are made as best possible, so they have the opportunities they deserve," he said.

The 1.5-mile walking tour of the Washita Massacre site included a stop at the Black Kettle Memorial Tree, where participants tied prayer ribbons honoring the memory of those who died.

"It was emotional to remember the history and the people who died," said Glenda Hill from the Desert Southwest Conference. "The culture that they come from still continues today. It's 150 years later and, thankfully, we are still honoring that culture."

The participants finished the day by visiting the Clinton Indian Church and Community Center, where they fellowshipped and made crafts with the help of Cheyenne and Arapaho children.

"It's amazing people have taken time out of their schedules to want to come, learn and expose themselves to Native cultures," said Wilson. "We are thankful folks have had a great experience."

Oklahoma Indian Missionary Conference leaders are beginning to plan a third immersion experience. The exact dates for the event will be available on the conference website at a later date.

Underwood is a freelance writer and communication consultant with ties to the Oklahoma Indian Missionary Conference. She is a member of the Comanche Nation of Oklahoma.