More than 130 female students who were living off-campus last semester moved onto the Africa University campus in January. They are being housed in a new dormitory, thanks to a $2 million gift to Africa University from Highland Park United Methodist Church (HPUMC) in Dallas, Texas.

The move is a significant and welcome change for these young women. Among them is Munashe Foroma, a second-year student who has gone from a daily commute to the campus—fraught with extra costs, increased vulnerability due to late night travel, and more limited access to campus-based resources and study groups. Now, she is the resident assistant (RA) assigned to the new dormitory. 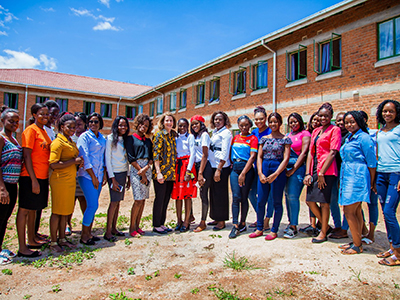 “We all want to stay on campus where safety is guaranteed as wells as access to resources like the library and wifi…The new hostel has great facilities and its clear to see that no expense was spared in constructing it,” said Foroma.  “The space is clean and lovely and just feels like a home away from home!”

Foroma’s new campus home is one of two major, HPUMC-funded construction projects at Africa University. The church designated its gift to build a women’s dormitory and complete phase two of the student union building. Construction began in the summer of 2019, with the two projects being worked on concurrently. While work on the student union building continues to progress well, faculty, students and administrators celebrated the completion of the dormitory in mid-January.

“When we received the news of the gift from HPUMC, we were so excited and now to see the dorm and to open it to students brings unimaginable joy to us…this is just amazing and we are deeply thankful,” said George Miti, the university’s dean of students.

Africa University’s growing reputation and impact have made it an institution of choice for students and their families. However, enrollment growth inevitably means added pressure on the campus infrastructure. HPUMC’s senior pastor, Rev. Paul Rasmussen, noted this when he made his first visit to the campus in February 2015 and shared his impressions with the congregation.

The Highland Park UMC congregation responded by making Africa University part of Beyond, its centenary capital campaign. In March 2016, HPUMC announced the $2 million gift—the largest from a local church and the most substantial investment in student services infrastructure on the campus in more than a decade.

Marti Benson, an architect and member of the HPUMC congregation, provided input in designing the buildings and helped to supervise construction.

“It is the greatest joy, not only for me but for the congregation as a whole, to see the excitement of the students, their happiness and the reinforcement of their faith in God as they enjoy the benefits of safe and comfortable housing while getting their education at Africa University,” said Benson.