Dr. Mark Zimmerman, (Advance # 10908Z) is an Advance missionary physician serving with Patan Hospital in Lalitpur, Nepal. The mission of Patan Hospital is to provide quality, compassionate health care to everyone who comes to the hospital, regardless of ability to pay.

The following is an excerpt from Zimmerman’s Christmas 2019 letter to family, friends and supporters:

The week before Christmas, toward the end of medical rounds, the resident doctors and I came to the bed of a sturdily-built young woman lying still and straight on her back. One of the doctors presented her case to me as a 36-year-old who’d come in from the eastern district of Sindhuli because of several days of abdominal pain and vomiting. On examination, he’d found her abdomen soft but tender; an elevated blood lipase pointed to acute pancreatitis as the cause. But there’s always more to a story than its dry, clinical particulars, and so it was with Asha’s.*

“Where are your people?” I asked her.

“There’s no one,” she replied.

“What do you mean ‘there’s no one?’ You mean they’ve all gone downstairs to eat? Someone should stay here with you.”

“They died in the earthquake. It was only my daughter and I left, and I had no choice but to send her to an orphanage. So, I’m alone.” 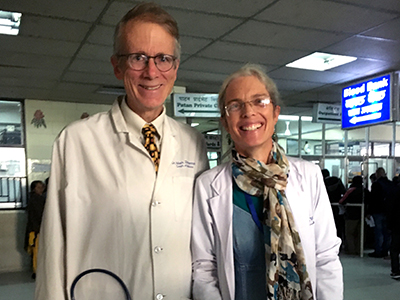 “All died,” she said, holding up her index finger, which showed a jagged scar. “I cut myself trying to dig them out.”

Most patients suffering from acute pancreatitis have a day or two of severe abdominal pain and go home, recovered, on the third day. Asha kept vomiting and her pain continued to require regular morphine.

We gave her large volumes of IV fluid to counteract the loss into the tissues around her inflamed pancreas and, because she was alone, we put a catheter in her bladder to collect and measure her urine.

When I came to see her Wednesday evening, she still winced at the touch of her abdomen. We couldn’t feed her because of the vomiting.

On Friday, with her decreased urine flow and raised creatinine, we realized Asha had gone into kidney failure, an ominous complication which increases the mortality of pancreatitis. Because her gut had stopped working, we placed a nasogastric tube which immediately drained brown, foul-smelling intestinal contents.

The next morning, she lay quietly with the blankets pulled up to her face, a tube in her bladder for urine, a catheter in her neck to deliver IV fluids, and the NG tube taped to her nose.

On Christmas morning, Asha lay bundled under a quilt by the open window. She said she’d managed a few sips of soup, which she couldn’t keep down, but she still summoned a measure of cheerfulness. The next day, we considered admitting her to the ICU, then sent her for the first of three days of dialysis. With that, her nausea lessened, and her kidneys began to produce a healthy volume of urine.

When I walked into her ward room a few days later, she was sitting up in bed for the first time. I asked my daily question about food intake, to which she smiled, showing a gap between her two front teeth, and began to giggle. She pointed her chin toward the bed across the ward. “They gave me a bowl of dedo (cornmeal mash). It was so delicious.”

At last, Asha’s agonizing 12 days of Christmas were finally coming to an end. With her hand, she beckoned me closer, and in a whisper, asked, “And do you think I could have some meat, maybe even some mo-mos (meat dumplings)?”

*Most names here have been changed.

excerpt from a story by Mark Zimmerman, missionary with Patan Hospital