Having an everyday, supernatural moment

When we think about God speaking to us, we like to imagine a supernatural’ grab-your-attention, drop-everything type of deal. The truth is, it’s rarely like that.

When I’ve felt that God was speaking to me, it was always through ordinary matters — usually my own voice. It was just a matter of whether or not I was paying attention.

When I was a kid, I got caught playing with fire in the back of the church my dad was a pastoring. A few of us 10 year-olds were hanging around while our parents were in meetings. We were bored and getting hungry. I did have this oatmeal cookie but instead of just consuming it, I had the brilliant idea of trying to burn it over a fire. I knew where my dad kept the matches and my friends went out to collect sticks for the fire.

We rendezvoused at the back of the church with the sticks to start the fire. I threw the match in the pile of sticks and we waited for the fire to grow. An adult caught us red-handed. The other kids ratted me out instantly saying it was my idea. Snitches.

The fire never really grew. The sticks were agonizingly slow to catch on fire. We must’ve been waiting around for 5 minutes before we were caught. We all assumed the sticks would catch on fire instantly. It didn’t.

Which brings me to Moses (bet you didn’t see that segue coming...). Moses had a supernatural, grab-your-attention encounter with God: the burning bush (Exodus 3:1-4:17). That’s right. God spoke to Moses through a burning bush — which at first sounds exciting and makes us think: if only God would speak to me that way, I’d definitely pay attention.

But here’s the thing (it’s something I learned at the back of the church at 10 years old): It takes a minute for wood to be engulfed in flames.

A subtler encounter with God

Moses only knew that something was different about this bush on fire only when he realized that it wasn’t being consumed by the fire (I emphasize “this” because I’m assuming that bush fires weren’t rare occurrences out in the wilderness where he tended the flock).

How long did Moses have to stare at the bush to realize, “Wait, why isn’t it burning up?”

At first, he probably assumed that bush was on fire. Maybe it was far away enough where his sheep wouldn’t be harmed. So he stared at it to keep an eye on it; making sure it didn’t spread. He stared at it for quite a bit before realizing that while it was indeed on fire, it wasn’t burning up. And when he came to the realization that’s when Moses said to himself,” Let me check out this amazing sight and find out why the bush isn’t burning up.” (Exodus 3:3)

Every single time I was certain God spoke to me it was through an everyday moment. Sometimes it was through other people: through their words or actions that made me say, “Hmmmm, there’s something bigger going on here... “ Other times, it was through a song, a dialogue on TV, or a book I was reading. Other times it happened listening to a sermon or a prayer at church.

A note from God 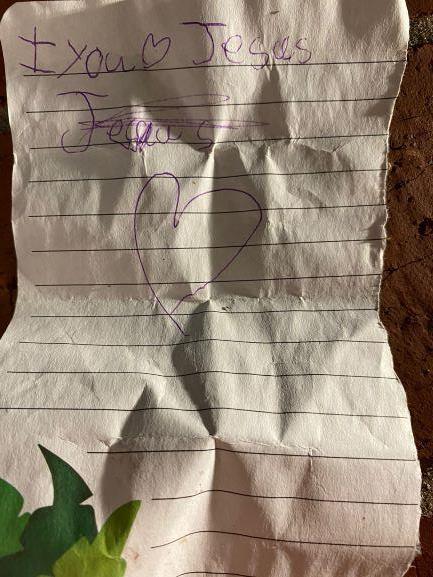 Once, it happened skateboarding around at night. I usually finish my route of longboarding at a Catholic Church near my house because it has the smoothest parking lot ever. After circling the parking lot once or twice, I head over to their Mary’s Garden and just sit for a few minutes. In the “garden” (it’s not really a garden garden) is a statue of Mary holding Jesus after Jesus is taken down from the cross. People leave flowers at the foot of the statue here and there. But this one night, there was a note in the hand of Jesus.

The curiosity that took over was overwhelming. I felt like I needed to see what was on the note (…what does that say about me…?). I kept going back and forth trying to figure out the moral implications of taking a peek at the note. However, in my heart of hearts, I knew that reading note was inevitable.

I looked to the left and to the right to make sure the coast was clear. I also looked up — not at God — but to make sure there were no cameras on me (which probably made me look a lot more suspicious than necessary). Then I opened the note. It was a note from a kid that said I love you Jesus.

I can’t tell you why I was so touched/blessed/moved by that note. The note was pure and innocent. It reminded me of my commitment and love to Jesus but also it reminded me of Jesus’ love for me. I really felt the presence of God in my heart in that moment and I was grateful.

I believe God moves within intimacy — and maybe that’s why we often miss out on God’s presence. Because we’re looking for God in roaring winds or unstoppable flames or thunderous earthquakes. When in reality God’s voice is a still, small whisper — and you can’t hear a whisper unless you’re paying attention, unless you’re close enough to the one whispering.

So, I guess in the end, what really matters is: are we awake to the presence of God all around us? Are we paying attention to God even in the ordinary and mundane things of life?