General Conference is over, what happens now?

EDITOR'S NOTE: This story is also available in Spanish.

The commission did their work. A conference was held. Speeches were given. Delegates voted. Decisions were made. Now what?

In the days following General Conference 2019, the desire to move ahead is alluring. Those happy with the decisions are ready for implementation. Those grieving the results are tempted to react rashly.

At times like these, however, Scripture encourages us to pause, listen and actively wait for the Spirit's guidance. As the hymn states, reflecting Psalm 46:10, "Be still, my soul: your God will undertake to guide the future, as in ages past" ("Be Still, My Soul" verse 2, United Methodist Hymnal 534).

A good place to begin, is simply to pause.

That may seem simple enough, but the author of Numbers helps us understand this wasn't always as easy as it sounds.

Can you imagine? At this point in the story, the Israelites are a nation without a land. They're camping in the Sinai Desert after fleeing Egypt where they were slaves. God has promised to lead them to a land of their own, but for days at a time God calls them to camp, to sit tight, to wait.

For those of us who are doers, these pauses are frustrating. Just think of the last time you were stuck in traffic, sitting at an airport terminal waiting for a delayed plane or placed on hold with a slow-moving government agency.

We can see the goal. We have some idea about which direction we need to go. Can't we just get going? 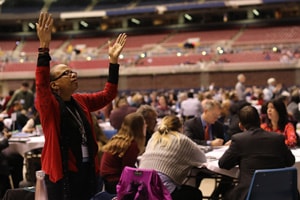 General Conference 2019 began with a day of prayer, and all United Methodists are encouraged to continue to pray in the days that follow. Photo by Kathleen Barry, United Methodist Communications.

But this kind of waiting is different. It is an opportunity to listen to God, to hear that which we might miss in the noise of moving forward.

Scripture tells us the prophet Elijah learned that God isn't always where we expect to find God. The Lord, he says, wasn't in the strong wind, earthquake or fire. Instead, Elijah met God in "a sound. Thin. Quiet." traditionally translated as "a still, small voice" (1 Kings 19:12).

In the words of the prophet Isaiah, God says, "In returning and rest you shall be saved; in quietness and in trust shall be your strength" (Isaiah 30:15 NRSV).

Gospel writer Mark writes, "Early in the morning, well before sunrise, Jesus rose and went to a deserted place where he could be alone in prayer" before leading the disciples to the next place (Mark 1:35-39 CEB).

Peace, rest, trust and direction are given to those who pause, listen and wait. 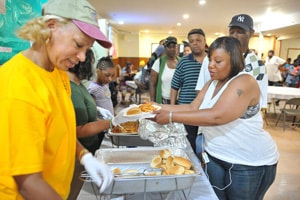 We are called to continue in ministry as we wait. File photo of lunch distribution by Ames Memorial United Methodist Church. Photo by Jay Mallin for the Baltimore-Washington Conference.

As United Methodists, we know that waiting for God is not something we do passively.

In his sermon, "The Scripture Way of Salvation," John Wesley writes about an active waiting. As we wait for God's grace to mature us to sanctification, Wesley advises Methodists to engage in ministry. The things we do in service to our souls and our neighbors, what Wesley calls "works of piety" and "works of mercy" respectively, help prepare our hearts to hear God and follow the Spirit's direction.

"This is the way wherein God hath appointed His children to wait for complete salvation," he writes (Sec. III, ¶ 9-10).

In this season, maybe that is our call as the people called United Methodists. May we take time to pause, listen and actively wait for the Spirit's leading.

*Joe Iovino works for UMC.org at United Methodist Communications. Contact him by email or at 615-312-3733. This story is also available in Spanish.