Patricia Rogers was born in Liberia, West Africa, in 1982.

Her American stepmother, who was of Caribbean descent, and her African father raised her. "My stepmother was a kindergarten school teacher for Nimba (Liberia) public school for over 30 years, and my father was a laboratory technologist for Lamco Hospital in Nimba County and a businessman," Rogers says.

She says her stepmother introduced her to The United Methodist Church at an early age.

"I can remember being awakened early on Sunday morning to the smell of cornbread and cabbage stew boiling on the stove as I got ready for church." She, her stepmother and adopted siblings attended Nimba United Methodist Church.

"The civil war in 1990 disrupted that life," Rogers says, "and I spent parts of my formative years in the refugee camps of Ghana outside the city of Accra." In 1992, she and her extended family moved back to Liberia. Rogers immigrated to the United States in 1994 and attended Covenant United Methodist Church in Gaithersburg, Maryland. 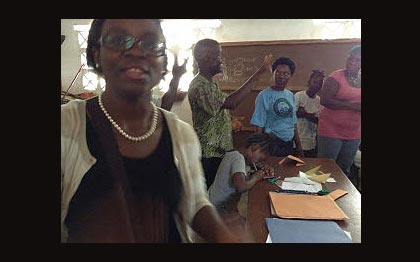 As a young adult, Rogers strived to empower and, ultimately, bring low-income individuals and underrepresented communities out of poverty. She worked with AmeriCorps VISTA through the Montgomery County (Maryland) Office of Community Partnerships on their nationally recognized Neighbors' Campaign, now known as the Neighborhood Opportunity Network. In 2015, she was a semifinalist for the 50th Anniversary of AmeriCorps VISTA award.

Along with an associate degree from Montgomery College and a bachelor's degree in government from American University School of Public Affairs, Rogers earned a diploma from the Women's Campaign School at Yale University and a Certificate in Women, Policy and Political Leadership from the Women and Politics Institute.

"Because of this scholarship," she says, "I am able to reduce the amount of student loan debt."

She say she cherishes her seminary years.

"I am being prepared through my classes to have an intelligent discussion of our faith and to be spiritually transformed through the practices of spiritual disciplines: reading the Bible, praying, fasting and tithing, keeping a Sabbath, acts of grace, justice, mercy and service."

In 2015, she and her young daughter journeyed back to Liberia, where Rogers volunteered for 10 weeks, preaching, speaking and teaching at several local congregations and schools.

Three to five years from now, Rogers sees herself as a graduate with a Master of Divinity degree from Wesley Seminary. "I am still prayerfully discerning what ministry God is calling me to specifically," she says.

She would like, someday, to mentor people exploring a call to ministry, eventually serving on a district committee on ordained ministry.

"My challenges," Rogers says, "are being far away from my loved ones, who are many but live in Liberia. Because of that, I have to work on creating community and support systems where I am."