Forgiveness for me? A Wesley hymn devotion for Lent

This is the second of four hymn devotions for Lent. Read more musical devotions.

Charles Wesley did not write his powerful hymn “And Can It Be that I Should Gain?” specifically for Lent, but it beautifully expresses much of what the season is about.

Many have carried a cross in their pocket during Lent. Feeling its shape throughout these 40 days reminds us of the gift of forgiveness made available through the crucifixion, death, and resurrection of Jesus. This forgiveness is a gift offered to us out of God’s great love for each one of us.

A crisis of faith

Understanding that Jesus lived, died, and was resurrected for the renewal of the whole world is one thing. Accepting he did it for me is another. 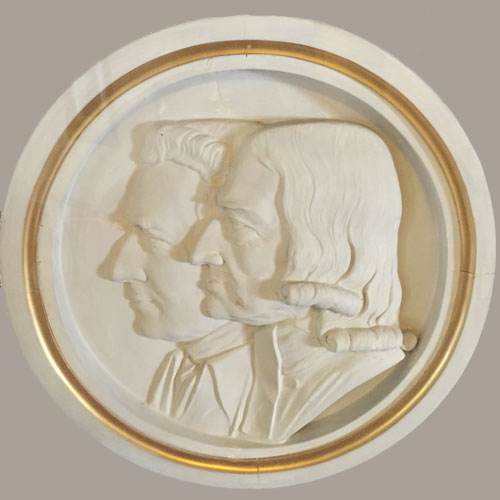 John and Charles Wesley did much of their ministry together. Photo by Joe Iovino, United Methodist Communications

Early in their careers as pastors, Charles and John Wesley struggled with this issue. While traveling from England to America in the fall of 1735 to serve as missionaries in Georgia, their ship encountered violent storms. Everyone on board the Simmonds was convinced the ship would be lost.

The brothers’ fear, compared to that of a group of German Moravian Christians who calmly faced the weather, caused a crisis of faith. The Moravians appeared content to accept whatever happened to the ship; a living example of Romans 14:8, “whether we live or die, we belong to God.”

Several years later, on Pentecost Sunday 1738, Charles received the peace he had longed for at sea. Back in England and struggling with sickness, he felt a “strange palpitation of heart.” Recording the experience in his journal, he wrote, “I now found myself at peace with God, and rejoiced in hope of loving Christ.”

As you might expect from the hymn writer, Charles spent Tuesday writing a “hymn upon my conversion” to commemorate the experience.

Listen to “And Can It Be that I Should Gain” performed by Rev. Clyde McLennan, www.smallchurchmusic3.com.
Non-commercial use of these recordings is permitted.

The following evening, May 24, 1738, John famously attended a society meeting near Aldersgate Street in London. As someone read Martin Luther’s introduction to Romans, “I felt my heart strangely warmed,” John writes in his journal. “I felt I did trust in Christ, Christ alone, for salvation; and an assurance was given me that He had taken away my sins, even mine, and saved me from the law of sin and death.”

Around 10:00 p.m. that night, Charles reports that John came to his home to celebrate. “We sang the hymn with great joy,” the one he wrote the day before, “and parted with prayer.”

No one knows with certainty which of Charles’ thousands of hymns the brothers sang that night, but “And Can It Be” is one of three scholars find most plausible.

The following year, Charles published “And Can It Be that I Should Gain?” in a collection called Hymns and Sacred Poems (1739) under the title “Free Grace.”

The hymn describes the feeling of awe we experience when we remember during Lent or any other time that Jesus gave his life for me.

Charles begins his hymn asking the questions with which he, John, and many others have wrestled over the years:

And can it be, that I should gain
An int’rest in the Saviour’s blood!
Dy’d he for me?—Who caus’d his pain!
For me?—Who him to death pursu’d.
Amazing love! How can it be
That thou, my God, shouldst die for me?
(bold added) 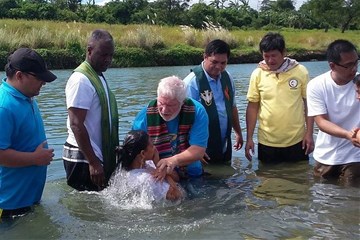 Baptism is the ordinary means of rebirth and initiation into the life, death, and resurrection of Jesus Christ. File photo by the Rev. Joey Galinato.

There is overwhelming awe in the realization that God has done this “for me,” which he repeats three times in this verse. We are so undeserving of such a wonderful gift.

“Amazing love!” Charles responds, an echo of Romans 5:8 to which our communion ritual also alludes, “God shows his love for us, because while we were still sinners Christ died for us.”

John Wesley calls this forgiving love the justifying grace of God. “[Justification] is the forgiveness of all our sins,” he writes in a sermon, “and, what is necessarily implied therein, our acceptance with God” (“The Scripture Way of Salvation” 1765). By faith through Jesus’ crucifixion and resurrection, we are forgiven and restored to relationship with God.

In the verses that follow (read the entire hymn here), Charles continues to celebrate the gracious gift of forgiveness and Jesus Christ who makes it possible.

He refers to Jesus’ death for our sake as “the depths of love divine” in verse two.

Verse three, which I wrote about at Christmas, the miracle of God coming to earth in Jesus is explained as an act of love:

He left his Father’s throne above…
Empty’d himself of all but love.

Reminiscent of the biblical story of Paul’s release from prison (Acts 16:25-26), verse four beautifully describes the moment of justification as liberation from sin:

My chains fell off, my heart was free,
I rose, went forth, and follow’d thee.

In the fifth verse (not in The United Methodist Hymnal #363) Charles may be describing the “strange palpitation” he felt that Pentecost Sunday when he writes, “I feel my Saviour in my heart.”

“Wesley's hymn originally entitled ‘Free Grace’ is one of the most significant lyrical expositions of salvation in the history of Christian song.”

The hymn then concludes with a declaration of the assurance Charles and John longed for aboard the Simmonds years before,

No condemnation now I dread,
Jesus, and all in him, is mine:
Alive in him, my living head,
And cloath’d in righteousness divine,
Bold I approach th’ eternal throne,
And claim the crown, thro’ Christ, my own.

We are often our harshest critics because we know our sin so well. The words of the Apostle Paul sound like our own, “I know that good doesn’t live in me—that is, in my body. The desire to do good is inside of me, but I can’t do it” (Romans 7:18 CEB).

During this season of Lent, with or without a cross in our pocket, we remember that Jesus has “taken away my sins, even mine, and saved me from the law of sin and death.”

“And Can It Be that I Should Gain?” reminds us that God’s forgiveness is something we receive through the death and resurrection of Jesus Christ, a gift offered to us. We are justified by grace through faith.

That is amazing love indeed.