For this pastor storytelling became a ministry

The three and a half years that the Rev. Frances Helen Foley Guest spent with her Methodist missionary parents in a Japanese prison camp during World War II shaped her ministry for the rest of her life.

Guest — the first recipient of The United Methodist Church’s 75-year-old Crusade Scholars Program (now known as World Communion Scholars) — was a lifelong advocate for peace and justice, a tireless campaigner against racism and sexism and a mentor to young women involved in ministry.

Most significantly, her early experiences made her a storyteller, said her son. Ken Guest was collaborating with his mother on a book about her family’s mission work in Asia when she died Nov. 26 at 94. 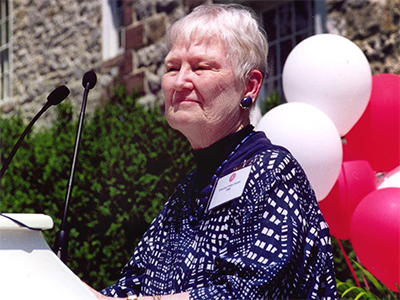 The Rev. Frances Helen Foley Guest speaks at Dickinson College in Carlisle, Pa., after receiving a distinguished alumni award in June 2002. The three and a half years she spent in a Japanese prison camp with her missionary parents helped shape her ministry. File photo by Kenneth J. Guest.

The story that defined the early part of her life began when Frances Helen’s parents — Walter Brooks Foley and Mary Rosengrant Foley — were assigned to Asia, first to India in 1926, at a time when political change was brewing. When they moved to the Philippines in 1935, Walter Foley served as pastor of the main ecumenical church in Manila, became involved with the Filipino independence movement and wrote against Japanese imperialism.

Once the Japanese occupied Manila, the secret police began to call at their home. Knowing the police would return, the family voluntarily checked into the Santo Tomás Internment Camp, set up at a Catholic university, and became prisoners of war.

Still, it was a difficult time and, in the end, people at the camp were dying of starvation. Finally, on Feb. 3, 1945, a U.S. strike force took over the university and ended the internment.

But the Japanese still held Manila and began bombing the American troops. Four days after the internment ended, a bomb fell directly on the Foleys’ room at the camp. Her father, 45, died from the blast and her mother, who nearly died, lost an arm.

Her son believes that storytelling became a way for her to deal with the trauma. “She created a set of stories that allowed her … to tell what had happened, but framed it theologically in a way that was about life, not death,” he explained.

The Methodist Board of Foreign Missions recognized her resilience and abilities by naming her the first Crusade Scholar in 1945, which allowed her to attend Dickinson College in Carlisle, Pennsylvania.

Even as she inspired others with her stories, Frances Helen was asking them about their own lives. In a way, it was almost as if the story wasn’t finished, Matthews said, “and it was our duty and our honor” to finish it.

excerpt from a story by Linda Bloom, assistant news editor, UMNS based in New York.