Finding a happy place through painting

Larry Magee is well known in the Tampa arts community. His paintings have been displayed at the Tampa Museum of Art and the Ferman Center for the Arts at the University of Tampa.

His delicate brushstrokes blend colors that almost explode off the canvas. As he methodically creates his paintings, his face reveals an inner peace at what he calls "a day's chore." 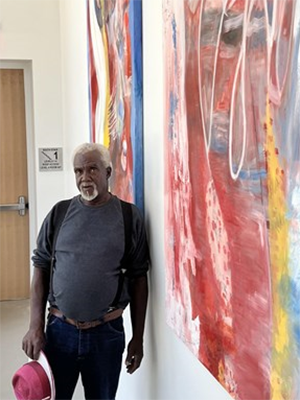 Larry Magee with the two giant paintings he completed for the Ferman Center For The Arts at the University of Tampa.

Hyde Park United Methodist Church is a part of the Florida Annual Conference.

He is also homeless.

Magee, 69, said he started painting as a child in Mississippi and never stopped. But as a homeless person, he had no place to hang his work or store supplies.

A partnership between the university, the art museum, and Hyde Park UMC began to change things for him.

Hyde Park has long had an active outreach to Tampa's homeless population. Church members provide free breakfast every Sunday for about 200 homeless people, and it's also where they can receive mail from family members.

The church is also the site of a weekly art therapy class that Magee attends, and U.T. Assistant Professor of Art Therapy Dr. Joseph Scarce facilitates.

It is what Magee calls "my happy place." 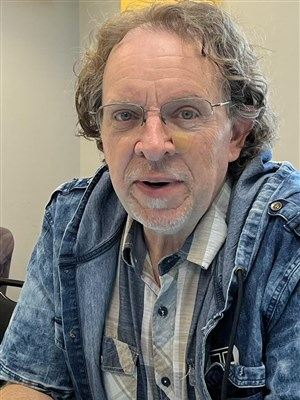 Scarce met Magee several years ago through Art Space, a collaboration between the church, university, and museum.

"This experience helped expand participants' imaginations, empowering many to give art-making a try," Dr. Scarce said.

In Magee's case, that led to a commission to display his artwork at the university's tribute to the homeless called "Fissures and Cracks."

That, in turn, led to a commission in 2019 to produce two giant 4-by-8-foot paintings for the new Ferman Center at the university.

The pandemic got in the way, though.

"Even though the commissioned paintings were different from his usual self-expressive technique, they still had much meaning and purpose for Larry to help send a message of support to the homeless community and show that art-making was becoming his livelihood."

According to the National Alliance To End Homelessness, the Tampa-St. Petersburg metro area has the highest rate of homelessness in the nation. An estimated 1,800 individuals in Tampa don't have shelter on a given night.

Several of Magee's works contain images of ID cards because many shelters require them before accepting someone off the street. Many homeless people don't have those cards.

To alleviate the problem, Hyde Park partners with Metropolitan Ministries. A representative from there is at the church's Sunday breakfasts to make IDs for free. They also help track down birth certificates and other official papers.

Many homeless people also struggle with mental health issues. That's where the art therapy outreach at Hyde Park makes a difference. Just looking at Magee's face as he paints drives that point home.

He has hundreds of paintings stored at Hyde Park and in Dr. Scarce's office at the Ferman Center. One of his works on this day includes the words "I love you." Others feature bright colors, chosen because it's spring and a time of renewal.

"It's like leisure for me," Magee said. "It makes me happy."

The class was wrapping up, which meant it was time to put away the supplies and store the two paintings Magee had finished. It was also a time for Magee to experience another reality in his life.

He was asked where he would spend the night. In a shelter, perhaps?

excerpt from a story by Joe Henderson, News Content Editor for FLUMC.org.