Delegation visits Syria for the first time since 2008

This delegation visited Syria for the first time since 2008, expressing solidarity with Christians and with all people facing the struggle for a presence and witness in their land.

The visit aimed at strengthening the bonds of unity among WCC member churches and listening to the concerns of its constituency amidst all the difficult living conditions they are passing through. The delegation raised the needs and expectations of the population of Syria, as well as other concerns of the Middle East region, where other similar visits took place, at the WCC 11th Assembly, to be held 31 August-8 September 2022 in Karlsruhe, Germany.

The delegation started its visit in the city of Damascus, with a visit to His Beatitude Patriarch John X, Greek Orthodox Patriarch of Antioch and all the East, in the Patriarchal residence, where discussions centered around the situation of the church and its mission and witness amidst the crisis that the region is passing through, especially in Lebanon and Syria, and the need to support Christians so they can stay in their homeland and be agents of transformation in their societies. Attendees also stressed the necessity of ongoing coordination with local churches in order to overcome the challenges that might have impacts on the Christian presence in the region. 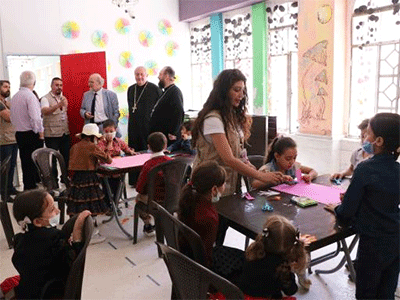 At the "Helm" Center in Arbin, affiliated to the Department of
Ecumenical Relations and Development of the Antiochian Orthodox
Patriarchate. Photo: MECC.

On the second day of its visit in Syria, the delegation headed to the city of Aleppo, and had a first visit to His Eminence Bishop Ephreim Maalouli, Greek Orthodox Metropolitan of Aleppo, Alexandretta and their Dependencies, at the Diocese's residence in Aleppo.

During the meeting with His Eminence Bishop Ephreim Maalouli, Sauca stressed the importance of the Christian presence in the Middle East, especially in Syria, explaining that his visit aimed at being informed about the challenges faced by Christians in Syria and in order to listen to their needs and submitting them to the WCC 11th Assembly.

On the third day, the delegation returned to Damascus, where Rev. Prof. Dr Sauca participated in the Divine Liturgy presided over by His Beatitude Patriarch John X in the Church of the Holy Cross.

In his homily, Sauca said: “We came here to show our love and support for the Syrian people. We think of you, we pray for you, and we care for you all. Christianity started from here and you are the cradle of Christianity and witnesses to Christ and His Resurrection several centuries ago. Your testimony is an encouragement for us. We came here to listen to you, and to carry your concerns and expectations to the members of the WCC 11th Assembly, which will be held under the theme “Christ's love moves the world to reconciliation and unity.”

On the fourth day, the delegation headed to the city of Arbin in rural Damascus, and visited the Social Rehabilitation Center affiliated with the Department of Ecumenical Relations and Development at the Antiochian Orthodox Patriarchate. The delegation visited as well the St Georges Greek Orthodox Church and its affiliated school, which have been restored by the Greek Orthodox Patriarchate of Antioch and All the East.

The delegation ended its tour by visiting the St Gregory Orthodox Society for Orphans and the Elderly Care Center in Damascus.