The pearl is a symbol of a 30th anniversary, and that seems fitting as Africa University marks 30 years of imparting pearls of wisdom through education.

Peninsula-Delaware was one of four conferences in the Northeastern Jurisdiction to maintain a 100% investment in the Africa University Fund in 2021. The jurisdiction has a tradition of being at or close to 100% overall for the fund. 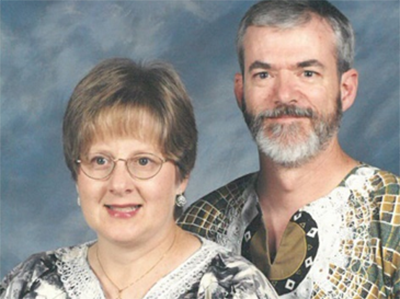 When the 1996 General Conference asked for $1 per member to fund Africa University, Kevin requested additional details. At the time, he chaired missions at Hockessin United Methodist Church in Delaware. The response, he said, “included information on endowing AU scholarships, so I proposed it to the Peninsula-Delaware Annual Conference and then spent two years traveling and preaching (as laity) to raise the $97,000 required.

“We started funding endowed scholarships at AU in 1997,” Kevin recalled. “We did a major push again early this century, and, like this year, sometimes use the annual conference appeal to add funds to the endowed amount.” He reports annually to the conference on Africa University’s continuing development and encourages congregations to celebrate “AU Sunday” to support the endowed scholarship fund.

The Goodwins value the interrelationship of education and mission.

“Karen and I are now helping to endow a scholarship in honor of her dad and a second one in honor of my extended family,” Kevin said.

The endowed scholarship is vital to Africa University, Kevin said. Although the cost of attending AU is inexpensive compared to U.S. tuition, relative to most incomes in Africa, it is not.

“Scholarships,” he said, “mean AU is also available to students not from upper-class families and to women who might not be considered by a family with boys. Lastly, students who study outside Africa might not be able to afford to return home if they have educational debt.” He noted that the Peninsula-Delaware Conference AU Endowment is now large enough to fully support three students each year.

Bishop LaTrelle Easterling, who now leads both Peninsula-Delaware and Baltimore-Washington annual conferences, credited Africa University with “producing some of the brightest minds engaged in every aspect of society. They are brilliant leaders,” she said, “who are making – and will continue to make – a difference for generations to come. A financial investment in endowed scholarships is an investment in a brighter future for Africa and the world.”

She added, “Africa University has proven without a doubt that it is a serious academic institution. I believe it has a vibrant and fruitful future and will only attract greater support as its story of success is told and evidenced.”

The Goodwins agree. As United Methodists struggle to determine the denomination’s direction and future, Kevin and Karen see hope as congregations share through the Africa University Fund.

“Based on the level the fund is supported across the United States,” Kevin said, “it might be one of the few things, that despite our theological differences, has wide acceptance. In short, I see a bright future for Africa University.”

excerpt from a story by Barbara Dunlap-Berg, a freelance writer and editor from Carbondale, Illinois.