As United Methodists quietly hold conversations about the denomination’s future — including a potential split — the Connectional Table wants a place at the table.

In a statement to the church, the Connectional Table’s chair and top executive said the denomination-wide leadership body has a role to play in finding “a sustainable peace.”

“As much as we have both worked our entire ministries for the unity of the church, we believe that, because of these fundamental differences, there can be no unity as we have understood and practiced it in the past,” said their statement, which is also translated into French and Portuguese.

“We believe that we need to acknowledge the conversations happening throughout our connection about ways to go forward in ministry, perhaps even along separate paths.”

The Connectional Table, which has representatives from each United Methodist region in the world, works to coordinate the work of general agencies and the mission, ministry and resources of the denomination.

In the weeks since GC2019, some United Methodists have expressed relief at the outcome while others have announced plans to resist. The drumbeat for possibly dividing the church along theological lines has only grown louder. 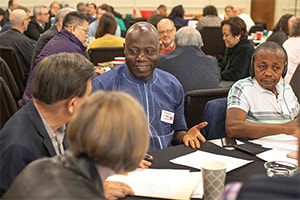 Alsted and Bigham-Tsai said they envision creating “space that will hold us in the creative tension that can take us forward while preventing the implosion of our denomination into chaos.”

They also challenged the Connectional Table to grapple with the impact of the special session on its own work, especially its role in ensuring missional effectiveness of general agencies.

Some of the Connectional Table members as individuals are already participating in some of the side conversations about the denomination’s future.

During the morning’s conversation, the body did not come to any consensus about what next steps the Connectional Table might take.

This is the Connectional Table’s last scheduled face-to-face meeting before the 2020 General Conference though other meetings could occur online.

Alsted told United Methodist News Service he thinks members offered a lot of good perspectives. But he said the best way they can serve the church will likely be on an individual basis “but with the knowledge, wisdom and understanding from being part of the Connectional Table.”

“Those of us in other parts of Methodist body hold you in prayer during this time,” Swanney said. “The conversations you are having don’t just affect The United Methodist Church but this has played out in different ways in the whole Methodist family.”

For the sake of God’s mission, not the mission of The United Methodist Church, he said, he hopes church members find “better ways of living with contradictory convictions rather than ignoring voices we’re not quite sure about.”