Building a bridge of understanding to better serve Native Americans is a top priority for the California-Nevada Annual Conference’s Committee on Native American Ministries (CONAM). The 13-member committee held a “Healing the Circle” retreat in August at the Ukiah United Methodist Church in Ukiah, Calif.

The purpose of the meeting was to provide an opportunity for Native American United Methodists from both states to meet in person; share their stories and personal histories; and, to connect nationally with the work of the Native American Comprehensive Plan.

“Part of the problem in this area among Native Americans is the mistrust of organized religion because of what religion has done in the past,” said Derrick Rainbow, a member of the Fort Yuma Quechuan Indian Tribe and the California-Nevada Annual Conference CONAM chairperson. He described how Native American spirituality was taught by faith groups to be demonic or paganistic. He says that historic trauma is still impacting relationships today. 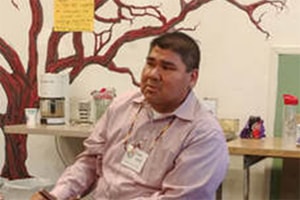 “We acknowledge that there is an important ministry to be done through the four Native American congregations in Northern California and Northern Nevada,” said Jorge Domingues, executive director of Connectional Ministries in the California-Nevada Annual Conference.

“The role of the CONAM is to advocate and educate United Methodists about the Act of Repentance and the harm that has been done historically to Native Americans in this country, including harm done by the church,” said Domingues.

“The first step in reconciliation or rebuilding a presence in Native communities is that you have to acknowledge what has happened,” said the Rev. Chebon Kernell, a member of the Seminole Nation and executive director of the denomination’s national Native American Comprehensive Plan.

He noted serious issues facing Native communities such as the loss of language and culture, and violence against Native women as opportunities for United Methodists to become allies to create positive change.

During the three-day meeting, the CONAM participants discussed everything from infrastructure, needed resources, to the potential impact of the 2020 General Conference.  The CONAM’s immediate goals are to work on community building in the conference; to empower indigenous voices; and to engage in social justice and mission work.