Mni Wiconi, "Water is Life," was the mantra chanted by a block-long group of over a thousand supporters of the Native American tribes protesting efforts to build a crude oil pipeline across Standing Rock Sioux land in North Dakota. But these supporters were marching far from the Dakotas; they were on the streets outside Philadelphia's City Hall on Saturday, Sept. 17.

The march was organized by Charlie Under Baggage, member of the Lakota Sioux tribe and a relative of Sandi Cianciulli, former chair of the Eastern PA Committee on Native American Ministry. She joined the march along with two other CoNAM members, Dale Shillito and Verna Colliver.

Advocates protesting in North Dakota and elsewhere claim the Dakota Access Pipeline would encroach on sacred land and endanger the life-sustaining water that serves the Standing Rock Reservation in North Dakota. More than a thousand gathered in solidarity at the Philadelphia Solidarity March for Standing Rock. 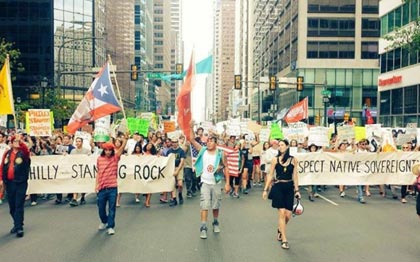 The crowd, with signs and colorful flags waving in the bright sunshine, began the march around 1 PM on Saturday, after rallying speeches by the march organizers.  Protected by Philadelphia police in squad cars and on bicycles, the group marched from 15th and Market Streets, down South Broad to Walnut Street, then across to Rittenhouse Square, and back to Market Street, ending the walk where it began.

The group paused with strong chants of "Can't drink the oil. Leave it in the soil" and "Respect Native Sovereignty," accompanied by drumbeats at several branch offices of TD Bank, a financial supporter of the companies attempting to build the pipeline.

This march is one of many involving groups around the country organizing and marching to support the thousands of people, including United Methodists and members of over 200 Native American tribes, who are in the encampment in North Dakota. They are prepared to stay as long as necessary to achieve their goal. Other indigenous people around the world have also given support to the cause.