When money is tight or people aren’t attending church because of COVID-19, contributions fall and budget cuts have to be made. Through it all, United Methodists remain faithful to the ministries of Jesus Christ through the church.

World Communion Sunday, which takes place on the first Sunday each October, suffered this fate. But United Methodist officials remain committed to the causes the annual special collection supports, such as Ethnic-in-Service Training (EIST) grants.

“It's such a precious gift,” said Cynthia Bond Hopson about the EIST grants. Hopson is an author and consultant who serves as chief equity officer at the Black College Fund of United Methodist Higher Education and Ministry. 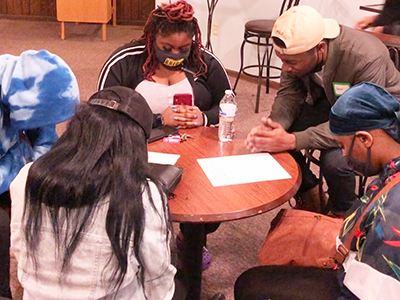 “It allows congregations to look around in their community and see a need and be able to fill it,” she added. “It's an opportunity to be innovative and creative about what kinds of ministry they do.”

In an interview, Hopson said the annual $10,000 grants for ethnic leadership development had to be cut last year to $6,000 because of disappointing fundraising results. It’s hoped that this proves to be just a bump in the coronavirus-addled road.

But even the reduced awards are welcome and useful, recipients said.

Through her non-profit organization Harper Hill Global, the Rev. Neelley Hicks helps direct counseling to victims of rape and genital mutilation in Africa, and rape in the U.S.

“It's a network of women, primarily, inspired to use communications strategies and technologies to bring hope and health into their communities,” Hicks said.

The $6,000 EIST grant specifically was used to expand mental health resources that could be offered in any church.

“I reached out to a group, the National Association of State Mental Health Program Directors, and they have developed TAMAR, which is the trauma, addiction, mental health and recovery program that they use in prisons,” Hicks said. “That model has been running for two decades successfully. It gives people the tools to deal with the effects of trauma, rather than turning to addictive behavior, violence or self-harm.

“The EIST grant allowed us to conduct training with them last year, so that people who wanted to lead a group in their house of worship would have the skills and the curriculum to do so.”

At the traditionally Black Kentucky State University, an EIST grant has allowed leadership training to continue in the midst of a severe budget crisis.

The University’s Wesley Foundation on campus received the $6,000 EIST grant to “create leaders that impact the Kentucky State University campus and our world.”

When she came on board to lead the effort, Jessica Neely was charged with helping two students who had been identified as having leadership potential.

In a few months, as many as 100 students were turning up.

“When we started this school year, we had over 200 people at our fall kickoff,” Neely said. “I now have 22 leaders that are in leadership formation.

“We formed an outreach team, a connections team, a discipleship and a worship team. So they're now starting to have a student leading all but one of those groups.”

Other projects funded last year provide Korean cultural and language training; day and summer camp programming for Hispanic children; advanced leadership coaching for people of color; a refugee welcoming center; education to help children mired in poverty; a program to develop African American leaders for the church; and another to bring together Native American clergy with non-Native Americans to share experiences.

It’s hoped that efforts to better tell these stories will cause contributions to World Communion Sunday to increase this year, Hopson said.

“I think congregations are happy to invest,” she said. “They just have to find that these needs are out there. The generosity of the people called United Methodist is what makes our denomination different from so many others.”

Donations to World Communion Sunday can be made online or by sending a contribution to P.O. Box 340029, Nashville, TN 37203. Please put “Sunday” in the note section of the checks.