When two or more United Methodists gather, someone will likely bring a covered dish. Sunday dinners and potlucks in church basements and fellowship halls have been a treasured tradition for generations. Cooks prepare their best recipes for the community gatherings. Many of these tried-and-true family favorites are preserved for the ages in cookbooks carefully compiled by countless church ladies.

Some congregations continue another long-time tradition -- selling the bound collections of recipes as a fundraiser. In 1904, Mary McLeod Bethune turned her favorite sweet potato pie into a moneymaker that laid the financial cornerstone for what is now United Methodist-affiliated Bethune-Cookman University. Years later, Dorothy Height, the American civil rights pioneer, shared Bethune’s recipe and story in “Occasions to Savor”. “(Bethune) always used to say that it was while she was cooking that she came up with the solutions to some of her most difficult problems,” wrote Height.

While cookbooks are a long-time fundraiser for churches, some new congregations are also producing them. Grace Place United Methodist Church is the first prison-based mission congregation in the Southeastern Jurisdiction. Sales of “A Taste of Grace Place” support prison ministries in Memphis, Tennessee. The recipes come from inmates and use only ingredients available in a prison commissary.

The oldest known church cookbooks include first-aid tips, recipes for kitchen cleaning solutions made with hot water and lead, and entire chapters with recipes for the sick and invalid.

The earliest volume in the collection of the United Methodist General Commission on Archives and History was published by “The Ladies of the Methodist Episcopal Church” in Ware, Massachusetts, in 1898. The 25-cent cookbook starts with a poem, “To the Busy Housewife,” and features recipes for creamed bacon and boiled celery on toast as well as tips for using leftovers, including how to make a “cracker omelet.”

The section of the Ware Church cookbook on beverages begins with an admonition from the teetotalling Methodists of the day: “Do not drink wine or strong drinks.” – Leviticus. The chapter starts with instructions for extracting juice from fresh grapes and ends with a recipe for mead – root beer mead. Finally, the dessert chapter includes a treat called “moonshine,” which consists of a fruit meringue to be whipped for “no less than thirty minutes” and served with cold cake.

“The Manila Cookbook,” compiled in 1919 by the Guild of the Central Methodist Church of the Philippines, includes recipes for bamboo shoots, mung bean soup and green papaya salad.

Reading the historic “Central Methodist Cookbook,” inspired Edelwisa Gonzaga, the wife of a United Methodist pastor, to write her own. “Hallowed Tables: Nourishing Recipes, Inspiring Stories” is a celebration of traditional foods cooked in Filipino homes. “Pastoring is a vocation, not a profession. It is hinged on a calling to serve in God’s vineyard or in the Philippine setting, his rice fields,” says Gonzaga who is often invited to dinner in the homes of congregants where the family’s best dishes are served for the pastor.

Dr. Belinda Forbes, a General Board of Global Ministries missionary in Nicaragua, says large, buffet-style church potlucks are not the norm there. However, people do gather in small groups in homes. The women who cook the meal plate the food in the kitchen.

Cornish pastry has been a favorite in Michigan’s Upper Peninsula since the mid-1800’s. A pasty is a dense, hand-held meat pie. Cornish immigrants ate them while working in the iron mines of the area. Since 1975, Rockford United Methodist has prepared and sold as many as 8,000 pasties during special twice-a-year sales. The Rockford church’s pasty recipe won’t be found in any cookbook. It is a church family secret. One more bit of trivia: The correct pronunciation of pasty rhymes with nasty not tasty.

Cookbooks are not a widespread tradition among congregations in Africa, says Tsitsi Madziyire of St. Andrews Seke North United Methodist Church in Chitungwiza Town, Zimbabwe. However, potlucks certainly are. Women will cook chicken, rice and other favorite foods to celebrate an abundant harvest or the pastor’s birthday. Zimbabwean children bless the food with simple prayers in Shona, such as “God bless our food” and “Thank you for our healthy appetites.” 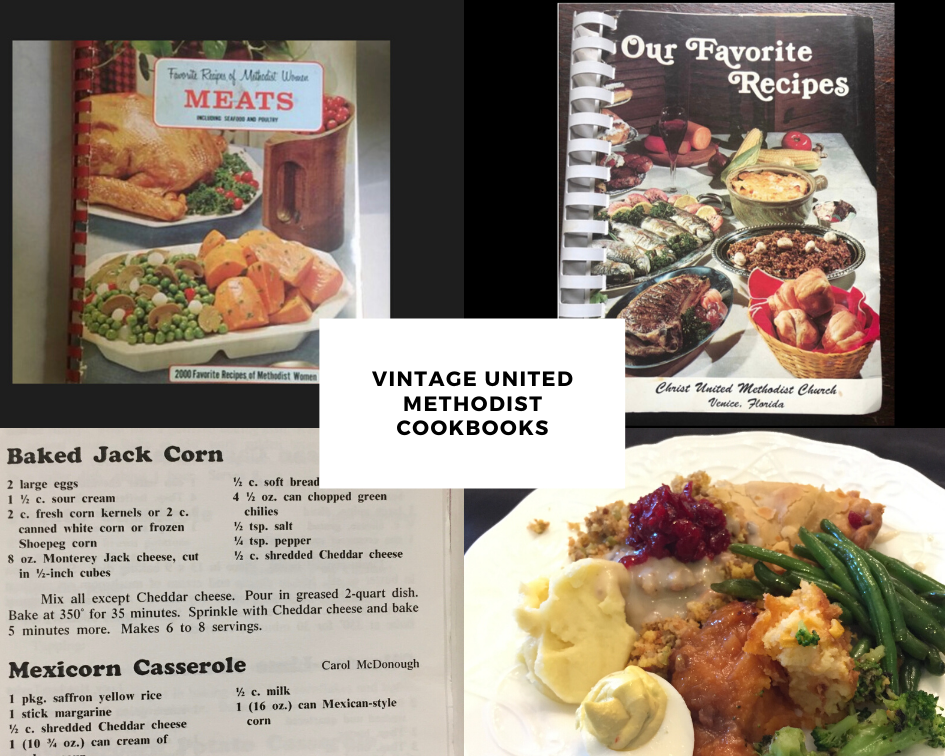 While church secretaries and others often spent hours organizing, typing and editing the recipes included in the cookbooks, the digital age has made production easier – and less expensive.

Trinity United Methodist in Idaho Falls, Idaho, produced an online cookbook with 125 years of church history and favorite recipes. In the 1950’s, Sunday dinner was served to the 200 in regular attendance. Careful notes detail how much food was needed: “25 heads of lettuce, 100 ribs of beef, eight cakes or 18 pies, fifteen #2 cans of peas, ten pounds of cheese….”

First United Methodist Church in Carrollton, Ohio, first published a cookbook in 1985 to fund the purchase of a new church organ. At the time, the microwave was the newest kitchen trend. In 2014, the congregation updated the book and made it available for sale on Amazon Kindle. The e-book is a mix of old and new recipes. A modern foreword includes tips on limiting fat and sodium and suggests substitutions for gluten free cooking.

United Methodist cookbooks and the meals inspiring them have come a long way since the days of packing a picnic when going to hear the circuit-riding preacher. However, combining food and fellowship is still the recipe for a healthy, growing church family.