Christmas greetings from Bishop Carter and the Council of Bishops

In a Christmas message to the people of The United Methodist Church on behalf of the Council of Bishops, Council President Bishop Kenneth H. Carter, Jr., encourages us, with a message from Isaiah 11, to be a sign of God's peaceable Kingdom.

Read Bishop Carter's message below or at this link:

A Peaceable Kingdom in a Divided World

Living eight centuries before Christ, the prophet Isaiah had a vision, which over time was given a name: the peaceable kingdom. It's a compelling vision: A shoot will come from a stump. A stump is a tree that has been cut down and destroyed. But the hope is that life would come out of destruction. We often place our hopes on a new leader, and so an ideal king would be enthroned, and would come from the family of David. A new political order would fulfill the hopes of the people. This passage may have been read on inauguration day, with the prayer that the Spirit of the Lord would guide and govern the leader.

Then Isaiah's vision shifts from political science to art, to the creation, a vision of a new heaven and a new earth: the wolf and the lamb will lie down together; no one shall hurt or destroy on God's holy mountain. Paradise will be restored. All nature will sing in harmony. Isaiah is painting a picture: this is what peace looks like. This is the peaceable kingdom.

In the United Methodist Church, we have reflected on what it means to have a heart of war and a heart of peace. In seeking a way forward, we have been honest about the ways we have seen each other as issues to be discussed, problems to be solved and obstacles to be overcome. And we have seen the image of God in each other and listened with empathy to one another. We know what violence looks like, the harm we do to one another and the harm that we experience.

The prophet asks a different question: "What does peace look like?" This vision of the prophet Isaiah has always been inspirational. You can see it, and, of course, that is a part of what makes it so compelling. In the 1820s, almost two hundred years ago, there was a deep separation within the Quakers living in the United States over slavery. It was a church fight. Some of us have been through church fights. Conflict is present in many of our local churches, in many of our communities, in our nations, and in our global denomination. There are deep divisions within the people called Methodist as the year 2018 concludes, over our polity in relation to the LBGTQ community and the interpretation of scripture.

Edward Hicks lived in Bucks County, Pennsylvania and was a Quaker minister. To make extra income he painted, mostly responding to the needs of others. He painted tavern signs, farm equipment, whatever was needed, and he was good at it. Although he was self-taught, he had a gift. He began to make a fair amount of money, and this upset his Quaker congregation, who felt that he was violating their customs of simple living. Finally, he became enmeshed in a church split, between those who wanted to live more frugally, and others who did not see a problem. He gave up painting and took up farming, but he was a terrible farmer. Later he gave up the preaching ministry too, and transitioned back to the craft of painting. 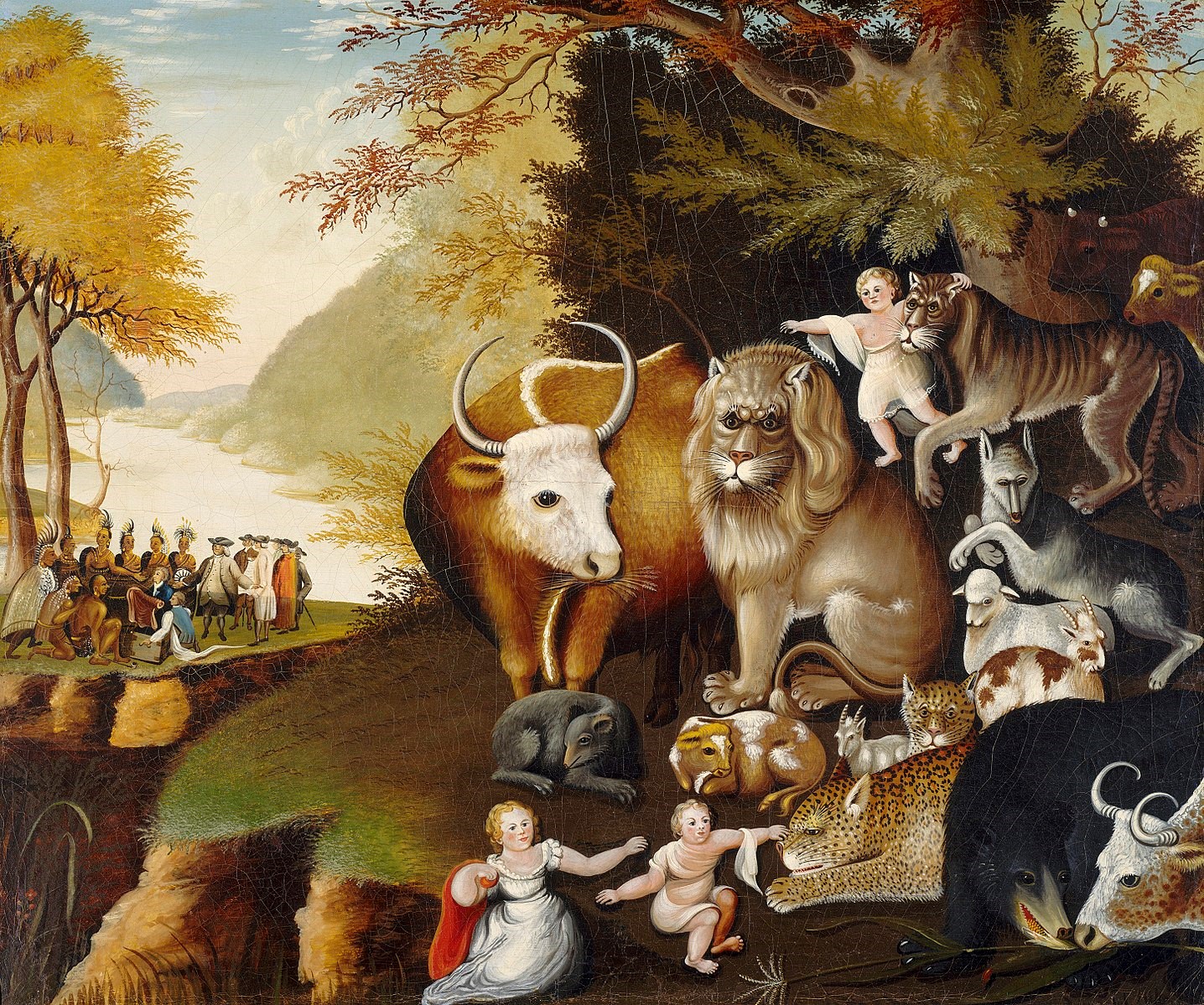 Soon enough, he came to discover that he could use his painting to express his faith. He began to draw oil paintings based on Isaiah's prophecy: The wolf shall live with the lamb, a little child shall lead them (11.6). He drew the same painting over and over again, and there are now over one hundred versions. We know it now as the Peaceable Kingdom, and it is his best-known work. One version of the painting is in the Metropolitan Museum of Art in New York City; another is in the National Gallery of Art in Washington D.C.; another, which inspired the composer Randall Thompson, is in the Worchester Art Museum in Massachusetts; and, another is in the Reynolda House, a few miles away from one of the congregations my wife Pam and I served, in Winston-Salem, North Carolina.

In most of the paintings the predators and prey are together. There is a bull, a lion, a lamb, a bear, a child. They are most often to the right of the painting, congested together. For the artist the animals reflected something of our temperaments--the lion was anger, the bear was calmness. To the left there is often a separate scene, William Penn conducting a treaty with the native Americans, the first peoples. A river flows toward them, and light shines upon them. The spirit, the light placed within us by God, helps us to dwell together in peace, despite our animosities and our differences.

Thirty-five years ago, in 1983, Stanley Hauerwas published a book entitled "The Peaceable Kingdom." His earlier works had been collections of essays in the field of Christian Ethics; this was an attempt to write an introduction to his discipline, from the perspective of character, virtue and narrative. The title was taken from Isaiah's prophecy and the introduction included a discussion of the painting of Edward Hicks. In time, Hauerwas would become one of our most influential theologians.

In "The Peaceable Kingdom," Hauerwas suggests that Christians are called to bear witness to the truth of the Holy Scriptures, noting that "this world is the creation of a good God who is known through the life, death and resurrection of Jesus" (15). We believe this to be the truth of the gospel, and yet we cannot use violence in the advancement of this truth. Instead we have trust and confidence in the ultimate victory of God over the forces of evil, sin and death. In a fragmented and polarized world, this is crucial: Christians with liberal and conservative convictions are tempted to use coercive strategies for the sake of an end they believe to be just, and Christian leaders mimic the practices of our secular counterparts in seeking strategic gains through actions that are not consistent with our covenant promises.

At our best, we understand that leaders never cease being disciples. The formation of character and conscience takes place through immersion into the Christian narrative and participation in the Christian community. We discover that we are sinners, that we have a continuing capacity for self-deception. To be a Christ-follower is to move beyond individualism to see the persons God has called us to serve; in so doing we discover the needs of others to be the pathways to our freedom, as they remove the greatest obstacle to freedom, namely our self-absorption (44).

Freed from self-absorption, as individuals and congregations, we are given new life. The call of God is, in Hauerwas' words, "the confidence, gained through participation in God's kingdom, to trust ourselves and others. Such confidence becomes the source of our character and our freedom as we are loosed from a debilitating preoccupation with ourselves" (49).

United Methodism, at the conclusion of 2018, has become a church infected by "a debilitating preoccupation with ourselves." Many of our congregations do not have the energy or will to be in mission beyond the walls of the sanctuary. Commenting a few days after his election to the papacy, Pope Francis spoke of the "self-referential church", which believes that "she has her own light", and "lives to give glory only to one another, and not the rest of the world." At a denominational and structural level, we often reflect the systemic polarization of our political cultures; our social pronouncements, even those that advance values of inclusion, protection of the vulnerable, and seek peace, are often harsh and brittle. Ironically, these pronouncements become louder as the church itself becomes more marginalized, fragmented and disconnected from the real world.

Our fragmentation, violence and disconnection are signs that "we have failed to be an obedient church," in the language of our prayer of confession (United Methodist Hymnal, p. 8). In our individual lives, in our congregations, in the Council of Bishops, in our denomination, in our nation, we yearn for a right path, for a new and living way, for an alternative to the status quo. In the language of the hymn, there are "fightings without and fears within."

The way forward may be the rediscovery of our core mission: "to make disciples of Jesus Christ, for the transformation of the world" (Book of Discipline, 120). Jesus is the embodiment of the peaceable kingdom. To recall the words of the gospel about John the Baptist: he was not the light; he came to bear witness to the light" (John 1. 8). The church approximates the peaceable kingdom as she stays close to the person and work of Christ. This is an act of radical self-denial. The first task of a disciple, Hauerwas notes, is not to forgive but to be forgiven (89). To confess our need for forgiveness is an act of humility, and one that calls upon the patience of God. To confess that we need to be forgiven is to give up control, and to place ourselves in communion with God's people, who are also imperfect and, yet, who are God's chosen messengers of grace and acceptance for us.

And so, we gather under the cross and flame, in communities around the world, to discover anew the meaning and message of Advent and Christmas. As we take the bread and cup into our hands we hear the good news:

Christ has died — making peace with God on our behalf (Ephesians 2);

Christ is risen — breathing on the disciples and saying, "peace be with you" (John 21);

As United Methodists, the words of an eighth-century prophet, the vision of an eighteenth-century painter, and the writings of a twentieth-century theologian can guide us, for our questions and struggles remain the same.

The ruins and devastation surround the prophet Isaiah in the eighth century, but he remains faithful: he sits still long enough, listens closely enough, discerns carefully enough, and it becomes clear. God paints a picture for him, and us. It is a portrait of anger and calmness, strength and weakness, living together. Could this vision exist, in the present moment: in our nations, in our denomination, in our local churches, in our families, within each of us?

Perhaps, in the words of Hauerwas, "we have the grace to do one thing" (149-151), meaning we live in community, we stay in connection and we engage in the basic practices of discipleship that make the forgiveness and love of God visible and tangible. This is the peaceable kingdom.

How can the United Methodist Church, in its global expression, become a sign of this peaceable kingdom?

At Christmas, if we sit still long enough, if we listen closely enough, if we discern carefully enough, all of this may become clear. Let us open our eyes and our ears, our hearts and our hands, so that we might see the salvation of God.

The Peace of the Lord be with you!