Black Methodist Coalition: "Liberty and Justice For All" - ICF

When President Obama was elected in 2008, pundits declared that the United States was entering a “post-racial era.”  At an historic gathering of Methodist denominations in Washington, DC., Bishop Reginald Jackson reminded the crowd gathered that with the gross inequalities that persist, and with vicious acts of race-based violence ongoing, a new struggle for “liberty and justice for all” should be the priority of churches across America.

Jim Winkler, General Secretary of the National Council of Churches, brought the gathered crowd to its feet as he spoke.  “Today, all Americans, whether they admit it or not, have to be prepared for the possibility each and every day they may be shot and killed or wounded, whether they are in Bible study in church, sitting in a movie theater or attending school, driving their car down the street, standing at a bus stop, or reporting on tourism for the local TV station.  This is insanity.  This is a crisis of faith that most houses of worship do not address in any way.”

“It seems that 239 years after our nation’s founding, and 151 years since the Civil War, we are still not ‘One nation, under God, with liberty and justice for all,’” stated Bishop Reginald Jackson (AME) in his opening remarks.  “It is also discrimination and bias built into laws and policies: the racism of being stigmatized and targeted because of the color of our skin…that must be confronted.” 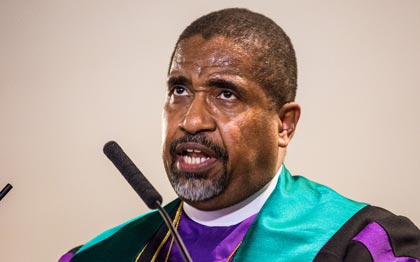 Bishop Lawrence Reddick (CME) announced the objectives of the “Liberty and Justice for All” campaign, an agenda that includes criminal justice reform, education reform, economic justice, gun safety reform, and voting rights.  “As people of faith, we believe hearts can be changed.  But the problems and consequences of racism cannot, and should not, wait for changes in the heart alone,” said Reddick. “Political leaders must act to do in legislative action for fairness and equality what changes of heart may be slow to do.”

Kathryn Lohre of the Evangelical Lutheran Church in America, called for all Christians to join in this partnership, which touches issues at the core of the Gospel. “All of us are suffering – all of us together,” she said. “We are called first to confess and repent for our complicity in racial injustice, and then to recommit ourselves to overcoming racism in our houses of worship, and in society.