Bishops Column: Where does it hurt? - ef

In August, the Cabinet and I went on a farm tour to learn and hear from some farmers in northern Illinois who have been affected by recent adverse weather conditions. We visited several different kinds of farms, including a family farm, a practicing organic farm, and an agritourism farm.

Many farmers have inherited the farm. In one case we heard about a farmer who grew up on a farm, but his father lost the land in the farm crisis of the early 1980s. Determined to be a farmer, he lived out of his car for a while, worked in the tool and dye industry, and slowly began to start farming full time.

This year has been particularly difficult because of the constant rain in the spring (roughly from April into June), which kept the crops from being planted, and then there was no rain in July. Fortunately, a good rain came mid-August. But much of the damage has been done. 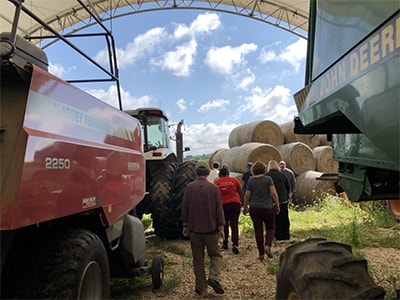 Members take a tour of a farm with large equipment. Courtesy photo.

With this year’s weather patterns, farmers had to figure out what to do. Each farmer—no matter what kind of farm and how long they had been farming—commented on how they learned some things in terms of dealing with the effects of this year’s weather. They admitted to having made some mistakes as they “gambled” on what to do. Adaptation is needed. Doing things differently than they had done for years and years isn’t easy to do!

As we talked to one farmer, it was clear that depression is a reality for many. Suicide rates are high among farmers. Unfortunately, resources for mental health in some of the rural communities is scarce. The emotional strain is not just the financial pressure – although that is great. It’s also the frustration of having built something from nothing or inheriting the family farm and then not being sure that there will be anything left after this year or another one like it. An extreme sense of failure and letting others down, such as parents and grandparents, is common.

Tears flowed along our farm tour. Hearts were heavy. What can you do? What can your church do? You can pray and raise awareness of the farm crisis in our conference and across the Midwest. It’s not always covered in the news, so calling for prayers in our congregations raises awareness about “where it hurts” in our own conference.

Make a point of learning more about what hurts your neighbor, the farmer. We run our fingers across the map of our annual conference and ask where it hurts, knowing that it hurts in many places and many ways, such as gun violence and immigrants who are further oppressed by our nation’s lack of comprehensive immigration policies and other concerns. But let’s not overlook our farmers!