United Methodist Bishop Gabriel Yemba Unda made his first trip to the most remote areas in the East Congo Conference to spread the word of God and see first-hand the “rural realities” facing United Methodists.

It was also the first time many United Methodists in the area had ever seen a bishop.

The East Congo Episcopal Area, which includes three annual conferences, is blanketed by forests. Access to some villages and cities is difficult, with many roads impassable.

With seven districts, the East Congo Conference covers a vast area with more than 340,000 United Methodists living there.

Unda said his visit to every district in the conference is a way of experiencing the realities of the area and evangelizing to the thousands of people living in these parts.

Many of the United Methodist faithful in the region said they were strengthened to see the bishop in their local church. 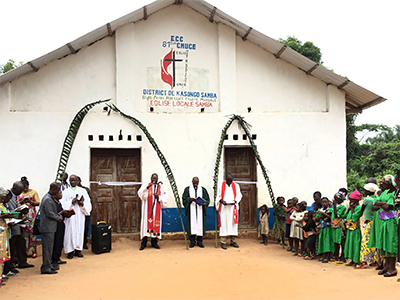 “It is a great honor for us to receive the visit of our bishop for the first time in our local church,” said Musafiri Muzaniwa, a 60-year-old member of Samba United Methodist Church in the Kasongo-Samba District, which is nearly 250 miles from the bishop’s office.

The Rev. Martin Kasongo, head of evangelism for the East Congo Episcopal Area, accompanied the bishop on his visits.

Dr. Damas Lushima, health coordinator for the church in East Congo, also was part of the travel team and said he was deeply affected by the trip.

“With tears in our eyes, we had witnessed the deaths of women and children due to the lack of health facilities in villages like Shekango, more than 300 kilometers from Kindu. We understood by this that people of God are suffering and it was important that the bishop join us in this journey.”

Lushima said the trip was made possible with support from the United Methodist Board of Global Ministries’ Global Health unit, which equipped the team with a field Jeep to allow access to the remote areas.

Among the places the group visited was Tunda, where the first United Methodist missionaries arrived in 1922 to evangelize East Congo.

One of the trip’s main objectives was to see the progress of construction work at Tunda General Hospital, Lushima said. The United Methodist Board of Global Ministries’ Global Health unit is funding the project.

In the course of his nearly 10-day journey, Unda took the opportunity to dedicate more than 10 churches built with the help of United Methodist partnerships and local contributions.

Unda said he needed to see the people and places with his own eyes.

“My eyes flow with tears when I see the people of God thirsty to see and receive their leaders. … Despite the state of the road, I asked God for strength and energy … I had to spend the night with all my delegation, even in the middle of the forest, as long as we knew where God sent us.”

excerpt from a story by Judith Osongo Yanga, director of communications for the East Congo Episcopal Area.