When Brant Lozano was 13, he thought the idea of a church for skateboarders was stupid.

But a friend kept inviting him, and eventually, Lozano gave in.

To his surprise, “Skatechurch” — a ministry hosted by the First United Methodist Church in downtown Tulsa — turned out not to be so lame, he said.

“Everybody was really good (at skating), and the facility was really nice, and I was like, ‘Wow, this is really cool,’” said Lozano, who was not a Christian when he first showed up.

“It’s nice — a fun place to be,” said Noah Lusk, 13, who listened quietly to Lozano’s 30-minute lesson on guilt and forgiveness of sins through Jesus Christ before taking his skateboard into the gym. 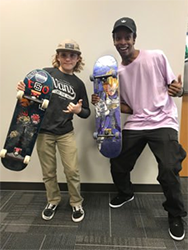 The ministry in Oklahoma’s second-largest city started in 1997 as skateboarding grew in popularity — and as skaters nationwide often were pushed off street corners and out of town squares.

“Over the years, other skate parks opened in the area, but the kids that valued the community and ministry remained, creating an outreach … ministry to youth who may never attend a traditional youth group,” said the Rev. Jessica Moffatt, First United Methodist’s lead pastor.

In recent decades, numerous faith-based outreach efforts designed to appeal to skateboarders have popped up all over the United States and Canada — and beyond.

“In both North and South America, skate ministry is huge,” said Nathaniel Muench, 24, founder of Skaters of Christ Skateboard Ministry and a skateboard missionary to Germany, where he has lived for the last three years.

Mike Steincamp, of North Carolina-based MS Skate Ministry, travels year-round to do events and produces gospel tracts and materials such as a 14-day “Landing Bolts” devotional guide — all geared toward skateboarders.

Steincamp, 28, said he’s been a skateboarder most of his life. And since all of his friends are skateboarders, he said, it was natural to want to share the gospel with them.

“For the longest time, we never had a place to go and skateboard,” said Jeff Hutto, who was 12 when he first came to Skatechurch and remains a regular.

Now a 33-year-old financial adviser who trades his suit and tie for shorts, checkered shoes and a Misfits brand skateboard on Sunday afternoons, Hutto said he tries to serve as a positive role model for the younger skaters.

“It’s a good place for kids to come. Parents know when they drop them off that they’ll be safe and taken care of,” he said. “They get to participate in the Bible study, which is a good thing for them. And they’ve got people like Brant that they can talk to about whatever.”

One of seven apportioned giving opportunities of The United Methodist Church, the World Service Fund is the financial lifeline to a long list of Christian mission and ministry throughout the denomination. Through the Four Areas of Focus churches are creating new places for new people and revitalizing existing congregations. Please encourage your leaders and congregations to support the World Service Fund apportionment at 100 percent.