Atheist asks, 'Why am I living?'

World Communion Sunday scholar Olga Kobzeva grew up in the former Soviet Union with loving parents who worked several jobs to provide the basics for her and her brother.

Her father was an atheist who lectured on scientific atheism. Through her childhood and adolescence, Kobzeva adopted her father's beliefs. She "believed that religious people [were] poorly educated and not very intelligent."

She considered herself an atheist even though the books she read introduced her to Christianity and the Holy Scriptures. Unfortunately, the Bible was not available in her communist country, so she only had her atheistic books for any knowledge about Christianity.

After a time of political and economic restructuring in the country, called Perestroika, Kobzeva was able to obtain a Holy Bible. "At the end of my schooling, I realized that atheism was not capable of answering the most important questions, for example, 'Why am I living?' And life, too, turned out to be much more complicated and richer than how scientific atheism had described it." 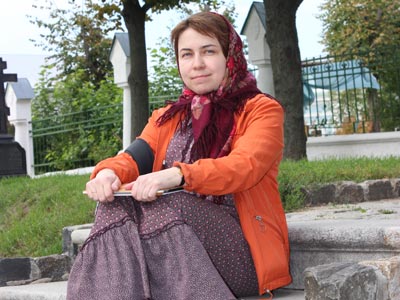 At the age of 19, Kobzeva accepted Christianity into her life. "At first I was not good at Christianity, because my atheistic books first of all attacked it, but personal meeting with Christ changed everything."

Since her baptism, Kobzeva has found a purpose in her life: to serve the Lord.

Now Kobzeva is a wife of a Methodist pastor and the proud mother of two children. "For the last 14 years, I have been an active member of The United Methodist Church in Eurasia," Kobzeva said.

"I am serving as the dean at the Moscow Seminary of The United Methodist Church. In my work, one of my main goals is to take an active part in the formation of new leaders for the UMC in Eurasia."

Thanks to her colleagues and your gifts on World Communion Sunday, Kobzeva was awarded a scholarship to help pay her expenses. "I am very grateful to (the) World Communion scholarship for having satisfied my request. And I am very grateful to those people who sacrifice so much even to lower their living standards, in order to help me and other people to learn. I pray for them. The Lord sees their sacrifice."

Your gifts on World Communion Sunday help people like Kobzeva offset costs of tuition and other expenses in order to acquire the skills necessary to reach their goals. "For many people like me, this scholarship provides the only opportunity to acquire the necessary skills to fully follow the calling of God and change the lives of those around them for the better."

"I have not finished my studies yet, but what I have learned is already positively affecting the quality of my work as the academic dean of the seminary, and in my ministry in the local church. (The DMin program) is helping me to achieve my goal to prepare new leaders for (the) Methodist Church in my region. I am certain that this study also contributes to my own growth as a Methodist leader.

"Thanks again to everyone in this scholarship resource who has helped me!"