We may experience circumstances that make life feel unbearable. Depression, pain and suffering, lack of access to resources and adequate health care, and continuing cycles of brokenness may lead some to seek solace through suicide or euthanasia (medically assisted dying).

And throughout human history, societies have often become a threat to life by choosing, in the name of their people or state, to kill some found guilty of particular crimes.

Depression is real. Pain is real. The harms some may have caused others may be real and irreversible. The United Methodist Church teaches that none of these conditions, real as they are, warrant the ending of human life. All of these situations can be addressed with other responses that value human life for all involved. United Methodists practice and advocate for such responses.

Suicide is often the result of untreated mental illness. Tens of thousands die by suicide every year and millions more attempt to end their lives. While mass shooting events continue to make headlines, individuals committing suicide continue to account for the majority of gun-related deaths in the United States. Having access to handguns in private households is strongly associated with dramatically increased rates of gun-related suicide. Firearms also remain the most common means of suicide in the United States (53%) followed by various forms of suffocation (27%), drug poisoning (9%) and non-drug poisoning (3%). This is part of why United Methodists advocate for increased access to mental health care and more responsible access to firearms. United Methodists do not see this as a choice between one or the other. Both responses are needed.

Suicide can happen at any time during a person’s life. It is consistently among the top ten causes of all deaths in the United States for people ages 5-64, and the second- or third-leading cause of all deaths among youth and young adults (ages 10-34) after accidents and, for those ages 14-24, homicide. United Methodists understand we have an obligation to see that all persons have access to pastoral care, medical care, and therapy when they begin to struggle with the feeling or belief that they should end their lives. Clergy, lay pastoral caregivers, and all who work with youth and young adults are encouraged to be trained in preventing suicide, helping persons struggling with suicidal thoughts, and caring for families and others affected by the suicide of a loved one.

Too often, people who have suicidal thoughts are met by stigma that discourages them from seeking help they need. The same is true for loved ones of those who have attempted or completed suicide. United Methodists are called to recognize where such stigma exists and help to overcome it as they walk alongside those dealing with suicidal thoughts or the loved ones of those who attempt or complete suicide.

United Methodists understand that offering appropriate support is challenging. Great persistence is often required. Support beyond emergency hotlines is often lacking, too expensive, or too difficult to access. And some may deny their need of additional support or refuse to access needed care that is available. Local churches and other ministries need to be prepared to commit to what may be years of support to prevent suicide while recognizing it could still occur at any time.

And when suicide occurs, it is devastating. Human beings are profoundly affected by death, trauma, bodily mutilation and acts of self-destruction. Suicide most often involves all four. The impacts in family systems or other close-knit communities can be generational. United Methodist clergy and lay caregivers accompanying loved ones after a suicide or attempted suicide recognize the depth and breadth of the impact crater these events create, and so should be prepared to offer more intense and varied forms of support over a longer period of time.

Ending one's own life fails to value human life as God does. Suicide is not God's desire for anyone. Even so, families and loved ones of those who have attempted or completed suicide may be assured that suicide does not separate us from God. All people are created and loved by God and nothing, neither in life nor in death, can separate us from the love of God (Romans 8:38).

Euthanasia, sometimes referred to as assisted suicide or medical aid in dying, is often perceived quite differently from other forms of suicide. Where physician- or other-assisted termination of one’s life is considered legal, the situations that surround it are also very different. Laws usually require medical certification that the person seeking euthanasia is terminally ill, has little prospect of meaningful recovery, is not facing significant mental illness that may otherwise cause suicidal thoughts, as well as other assurances that the person is fully competent to make this decision and is not being pressured to end their life. Often, this decision is made in open consultation with family and friends and tends not to bring the same sense of stigma or trauma commonly found with other forms of suicide. 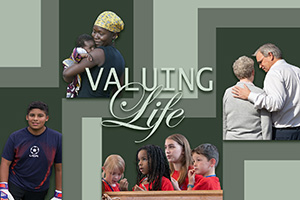 United Methodists worldwide seek to bring abundant life to people at every stage through the hands on ministries we support and the advocacy we do.
See more topics in our "Valuing Life" series.
Even so, United Methodists reject all efforts to end one’s own life and consider them as a threat to the abundance of life God intends for all people. We affirm that “God has continued love and purpose for all persons, regardless of health.” Christ’s promise of abundant life continues while we live. We affirm this promise, even and especially in the face of impending death. Instead of seeking death, we look for ways to relieve pain, support caregivers and bring as much hope, love, joy, comfort and meaning to the final days and hours of life as we are able. This is why United Methodists encourage the use of hospice care where available.

United Methodists are also deeply aware of the ways cultures may devalue the lives of older adults and others facing impending death. In too many situations, such persons are considered or made to feel as if their continued existence is merely a burden and not the blessing God intends. United Methodists remain deeply concerned that even in the best of scenarios provided under current legal protections, those facing the prospect of death may be unduly pressured to choose death instead of life. United Methodists are committed to helping one another choose life as long as it may last.

At the same time, United Methodists recognize a distinction between medical aid in dying, which actively promotes death, and providing care appropriate to one’s stage of dying. United Methodists support individuals and families making decisions with their physicians for the sake of reducing pain and not prolonging life when there is no reasonable hope for recovery.

Christians worship a God who received the death penalty. Jesus died on a Roman crucifix under the authority of the state. But his resurrection stands as a solemn word of judgment on death itself and all who wield it against others.

Have questions? We have answers!

God desires healing and restoration of relationships. God’s grace never stops reaching out while we live to restore our relationship with God and with each other. United Methodists affirm that capital punishment represents a denial of “the power of Christ to redeem, restore and transform all human beings.”

United Methodists also affirm that all human life is of sacred worth. When governments implement capital punishment, the sacred worth of the life of the convicted person is devalued and all possibility of change in that person’s life ends.

And United Methodists are concerned about crime throughout the world and the value of any life taken by others. The Church believes that all people have sacred worth, both those who commit crimes and those impacted by them. Because United Methodists value the lives of all involved, we seek to offer as much healing as possible to its victims. Healing can come as safety and security are restored and the broken bonds of mutuality and shared existence are mended. And for those who commit crimes, we advocate that they be held accountable through making amends to those they have caused to suffer and, if possible, given the opportunity to return to a fruitful place in society and community. They also deserve support, if released, to reduce the likelihood of recidivism and the transmission of cycles of crime to succeeding generations.

United Methodists value life and the opportunity for all to experience it abundantly. That is why we reject suicide and euthansia (medically assisted dying). And that is why we reject capital punishment and organize and advocate to eliminate it, worldwide.

It is also why we do more than take positions on these matters. We take a stand alongside people to offer love, support and connections to care for all who struggle with thoughts of suicide, with challenges near the end of life and with the effects of crime or having committed crime, as long as they all shall live.