"And God himself is born:" A Christmas hymn devotion

Editor's note: This is the second in a series of 4 weekly devotions for Advent based on the hymns of Charles Wesley.

We begin life remarkably vulnerable. Infants have no ability to care for themselves, but need loving adults to nurture them, keep them warm, protect them, and show them that the world is a safe, loving place.

This was also true of the baby Jesus. He came into the world much like you and I did. He needed Mary, Joseph and others to feed, hold, change, and teach him.

Jesus, however, was far from ordinary. We profess this child, whose birth we are preparing to celebrate, is God in the flesh.

How can this be? 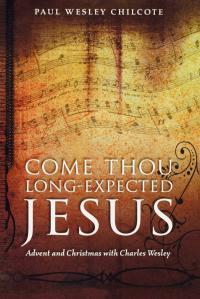 The Rev. Paul Chilcote, a United Methodist pastor, is the author of a book of Advent and Christmas devotions based on the hymns of Charles Wesley. Image courtesy of Cokesbury.com.

In the December 2016 Get Your Spirit in Shape podcast episode, the Rev. Paul Chilcote, United Methodist author of Come Thou Long-expected Jesus: Advent and Christmas with Charles Wesley, calls this “a central paradox of the Christian faith. How do we conceive that God, who is eternal and not bounded by time or space or any of those kind of limitations, how do we conceive that that God becomes a human being?”

Theologians call this paradox the incarnation. Somehow, Jesus is both fully God and fully human.

As one might expect from the poet-theologian of the early Methodist movement, Charles Wesley’s descriptions of this paradox are biblical, beautiful and poetic.

For example, hymn 6 of his Hymns for the Nativity of our Lord reads:

Whom all the angels worship,
Lies hid in human nature;
Incarnate see
The deity,
The infinite Creator!

See the stupendous blessing
Which God to us hath given!
A child of man,
In length a span,
Who fills both earth and heaven.(verse 4)

Theologians through the centuries have tried to explain how this works. For the most part, they have limited success in describing it well. You can learn more about our United Methodist understanding of the incarnation here and here.

While it may be tempting to assign this doctrine to the areas of our faith that we cannot understand or describe, Chilcote encourages us to look to Wesley.

“I don’t want to simply escape into mystery here, because Charles does everything he can to try and explain it,” Chilcote shares, “to try and make some sense of this mystery in our lives.”

Wesley’s key to understanding the incarnation lies in Philippians 2:5-11, which many scholars believe is one of the earliest hymns of the Christian church.

It shouldn’t be a surprise that one great hymn writer was inspired by another.

In this Bible passage, the Apostle Paul describes the miracle of Jesus emptying himself of his God-traits to become a human being.

For example, Jesus emptied himself of his omnipresence, being everywhere all the time. Instead, he was confined to time and space. He gave up his omniscience, being all-knowing. While he could see into people’s lives and hearts better than anyone, he had limited, human knowledge. He also surrendered his omnipotence, being all-powerful. He performed miracles, healings and exorcisms, but there were human limits he accepted.

Jesus emptied himself and became vulnerable for us. 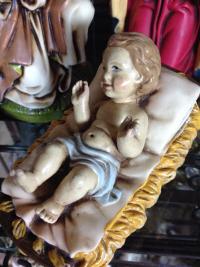 Jesus emptied himself of all but love to be born as a human for us. Photo by Kathryn Price, United Methodist Communications.

Wesley echoes this understanding in other Hymns for the Nativity of our Lord. He writes:

Lo! He lays his glory by,
Emptied of his majesty!
See the God who all things made,
Humbly in a manger laid.
(Hymn 12, verse 2, bold added)

In another hymn from the same collection we read:

Emptied of his majesty,
Of his dazling glories shorn,
Being’s source begins to be,
And God himself is BORN!
(Hymn 4, verse 2, bold added)

There is one God-trait, however, that Wesley believed Jesus kept: love.

One of the more famous places in the hymnody of Charles Wesley where we hear this idea is in a hymn we don’t normally sing at Christmas. Published under the title “Free Grace” in 1739’s Hymns and Sacred Poems, we know this hymn better by its first line, “And Can It Be that I Should Gain,” United Methodist Hymnal #363. Wesley writes,

He left his Father’s throne above,
(So free, so infinite his grace!)
Empty’d himself of all but love,
And bled for Adam’s helpless race. (verse 3, bold added)

“In Jesus God empties God’s self of those divine qualities, except for love, which if you think about that for a moment,” he continues, “is the essence of God.”

“So you can say Jesus is fully divine because he’s fully love. But he’s also fully human because he’s born into this world as a human being.”

God coming to us so completely and yet so vulnerably is the miracle of the incarnation. At Christmas, we celebrate God coming to dwell among us.

Many feel vulnerable this Christmas. Some live in far away places. Others are right next door. Some don’t have enough to eat, struggle to find clean water, don’t feel safe in their own homes or neighborhoods, feel rejected by others, and so much more.

Through these hymns, we remember that God did not wait for us to find our way to heaven. Instead, God emptied God’s self of all but love to come in the person of Jesus for the sake of us all. Jesus became vulnerable to share love with the vulnerable.

Philippians 2 not only describes how this happens, it is also a call to each of us to empty ourselves for others as Christ has emptied himself for us. This Christmas we can give thanks for the gift of a vulnerable baby by emptying ourselves of all but love for someone in need.