Without Africa University, Pierre Omadjela doubts he would be where he is today. He was teaching high school in the Democratic Republic of Congo when, much to his delight, he received a scholarship to attend AU, 3,500 miles from his homeland.

“I served as class representative for Intensive English, leading 95 students from five countries,” he said. “I was the subwarden for master hostels, leading students from 12 counties.” As the AU choir’s student representative, he brought the singers to Durban, South Africa, during the World Methodist Council meeting. 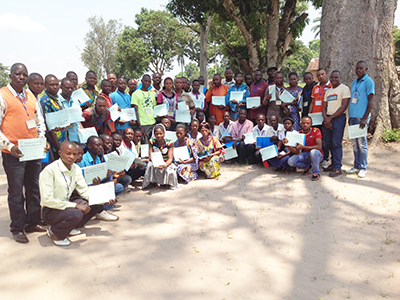 “Today,” he said, “we are a team of 21 people in our central conference. We are planning to train a communicator in each district. Here, in Kinshasa, we now have communicators on the local church level. I am proud to be the initiator of this, and I praise God.”

In Africa, where United Methodism is experiencing phenomenal growth, Pierre’s ministry is essential. One of his first contributions was introducing the use of internet and social media for church communications.

Under his guidance, the number of published articles from the central conferences increased from one or two per month to about 15. Recently, Pierre proposed adding a French editor to publish stories on the UMC French website, “allowing UMC members around the world to know what is happening in our central conference,” he noted.

Pierre’s job extends well beyond basic communications. Since 2015, he has been involved in the e-readers project of Discipleship Ministries and the General Board of Higher Education and Ministry. “I have trained students in the faculty of theology in eight universities and theological institutions,” he said.

In a region where Ebola and other diseases are grim realities, Pierre plays a vital role. Last year, he helped to transmit more than 7,000 sensitization messages to church members in the East Congo Area. During DRC elections, Pierre used UMConnect to share peace-focused audio messages from the Central Congo bishops.

Pierre would like to pursue a doctoral degree and, eventually, teach at AU.

Pierre treasures the opportunity to be in ministry with people all over the world. Reflecting on the denomination’s growing diversity, he said, “AU is important as it allows future church leaders to learn how to live with people who are from different countries with different cultures.

“I am serving the church in D.R. Congo, Tanzania, Zambia, Central Africa and South Africa,” Pierre added. “I couldn’t do that if I did not go to Africa University.”

excerpt from an article by Barbara Dunlap-Berg, freelance writer and editor, retired from UMCom