The Rev. Frances Helen Foley Guest and her parents were prisoners in a Japanese prison camp during WWII where she witnessed the death of her father.

A Japanese bomb fell directly on the Foleys’ room at the prison camp and her father, 45, died from the blast and her mother, who nearly died, lost an arm, Guest was 20 years old.

She turned this tragedy into a ministry to help others and the Methodist Board of Foreign Missions recognized her resilience and abilities by naming her the first Crusade Scholar in 1945.

Despite the recognition, Frances Helen was discouraged from her desire to become a minister (women in the Methodist Church would not win full clergy rights until 1956). Instead, she settled in Florida with her schoolteacher husband, Thomas Lewis Guest, a fellow student at Dickinson, who died at the age of 50. 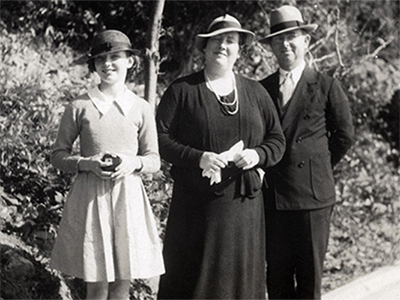 After the death of her husband and with her two daughters, Kathe and Sharon, out of the house, Frances Helen was determined to enroll in seminary. Accepted at Candler School of Theology, she moved to Atlanta with her son Ken, then 13, later that year.

She was 51 — much older than her classmates and even some of her professors, who offered no recognition of her years of lay experience and public speaking. Her son knew it was a struggle but was proud “of her and her courage to pick up and move on and follow a dream like that.”

Frances Helen was the target of many messages of hate after her first appointment at a church in central Florida in 1979, Ken Guest said.

After she retired, Frances Helen entered a new phase of ministry when she moved to New York in 1991 to live near her son and became an integral part of St. Paul and St. Andrew. Peggy Griffin-Jackman — who shared a common bond with her as a former missionary kid — recalled that Frances Helen was the first to volunteer to join her to walk in New York’s Gay Pride Parade.

Ressie Mae Bass, a friend of nearly 40 years who knew Frances Helen first in Florida and later in New York, said that Frances Helen continued to fight for social justice in her later years. “She was not a radical person, but she was very intentional.”

As she had in Florida, Frances Helen continued to bond with younger women involved in ministry — even in the last couple of years, when she face limitations imposed by her advancing age. That is why her family plans to honor her legacy with a scholarship fund.

Even as she inspired others with her stories, Frances Helen was asking them about their own lives. In a way, it was almost as if the story wasn’t finished, Matthews said, “and it was our duty and our honor” to finish it.

excerpt from a story by Linda Bloom, assistant news editor, UMNS based in New York.

One of seven apportioned giving opportunities of The United Methodist Church, the Ministerial Education Fund is at the heart of preparing people for making disciples of Jesus Christ for the transformation of the world. The 13 United Methodist seminaries help students to discover their calling through the challenging curriculum. The fund enables the church to increase financial support for recruiting and educating ordained and diaconal ministers and to equip annual conferences to meet increased demands. Please encourage your leaders and congregations to support the Ministerial Education Fund apportionment at 100 percent.