Bishops in Africa have resolved not to support any proposed legislations or plans that may result in a split or dissolution of The United Methodist Church.

In a statement at the close of the Africa College of Bishops retreat Sept 2-6, the bishops said the church would continue in Africa after the 2020 General Conference.

“We do not support any legislation that calls for the dissolution of The United Methodist Church. We uphold our values as a connectional and worldwide church committed to ‘making disciples of Jesus Christ for the transformation of the world’,” the bishops’ statement said.

President of the Africa College of Bishops, John K. Yambasu of Sierra Leone, said the bishops would not allow others to set the agenda for the church in Africa.

The bishops said they were concerned that conversations on the future of The United Methodist Church are taking place in the United States without African representatives. 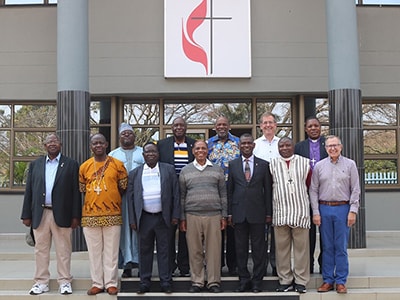 United Methodist bishops from Africa and the U.S. who attended the meeting of the Africa College of Bishops gather for a photo at the Zimbabwe West Conference in Harare. Photo by Eveline Chikwanah, UM News.

During his keynote address, Yambasu said the future of the church is not about winning and losing.

In an interview with UM News, Yambasu said this year’s College of Bishops retreat at Africa University aimed to sensitize African bishops regarding the impact of decisions on the future of the church in Africa.

Representatives of the Africa Initiative and Renewal Coalition also attended.

“We invited only those groups who requested to be invited. We remain open for other groups who may want to be in conversation with us,” Yambasu said.

Swanson said he attended the retreat in order to listen to his African colleagues.

“I didn’t really bring a message. What I really wanted to do was to listen and in so doing I heard some things that I felt like I needed to hear, not just with the head but also with the heart,” he said.

“It’s not just a name, but it’s a really valuable asset, the doors that name opens up, the respect it engenders in people who are not United Methodists, even the political figures, economic institutions, education institutions,” he said.

“That name carries a lot of weight in Africa and I don’t think people understand that with their hearts as well as their heads. They don’t understand what they may be losing if the African United Methodist Church loses that name.”

Eveline Chikwanah is a communicator of the Zimbabwe East Conference.

Bishop John K. Yambasu of Sierra Leone addresses a meeting of the Africa College of Bishops in Mutare, Zimbabwe. The bishops said the church would continue in Africa after General Conference 2020. Photo by Tim Tanton, UM News

United Methodist bishops from Africa and the U.S. who attended the meeting of the Africa College of Bishops gather for a photo at the Zimbabwe West Conference in Harare. Photo by Eveline Chikwanah, UM News.