Growing up on a small farm in South Carolina, James H. "Jim" Salley never dreamed of becoming the top fundraiser for Africa University, the university founded by the General Conference of The United Methodist Church in Mutare, Zimbabwe.

Nor did he expect to give more than $130,000 to establish an endowed scholarship to honor his parents — Marie and James Salley — and ensure exemplary education for students from across Africa.

But that's the story.

"My father was a carpenter and small-scale farmer," recalls Salley, associate vice chancellor for institutional advancement at Africa University. "Mother was a housewife and protector of her children. They both grew up hard. Mother was the daughter of a big-scale farmer whose father and mother made a living from the farm in Allendale County, South Carolina. Grandmother and Grandfather were not sharecroppers. They owned the farm. 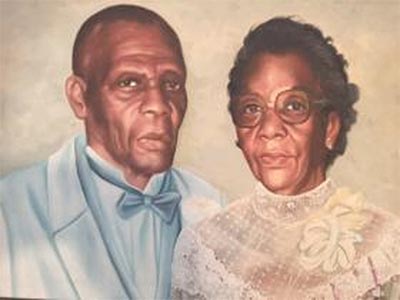 A portrait of James and Marie Salley, parents of James "Jim" H. Salley who has donated more than $130,000 to Africa University for an endowed scholarship in their honor. Photo courtesy of James H. Salley.

"Mama and Dad fell in love, got married, settled in my father's hometown of Orangeburg, South Carolina, and raised my four sisters and me on a small farm."

They modeled Jesus' words in Matthew 7:12. "Do unto others as you would have them do unto you." And they taught by example. "When we learned something," Salley remembers, "we were encouraged to share."

Their philosophy? "Education does you no good if you keep the knowledge in your own brain. Get all the education you can to better yourself and help others."

By 1986, Salley was a director of the United Methodist Board of Global Ministries. In Nairobi, Kenya, he participated in initial conversations about establishing a United Methodist university in Africa. Later, as a member of the site-selection committee, Salley helped plan and present the project to the 1988 General Conference. Delegates approved the proposal.

Salley become AU's associate vice chancellor for institutional advancement in 1992 and has been on the Mutare campus at least 114 times.

With his leadership, Africa University has grown from 40 students in renovated farm buildings to 1,600 students, with more than 8,000 graduates and 44 modern buildings. The university endowment fund now stands at $77.5 million.

"More than 90 percent of our graduates remain on the continent of Africa, and we have a 96 percent graduation rate," Salley says.

The average annual cost for an undergraduate Africa University student is less than $6,000. Yet, most aspiring students come from African countries where the average income ranges from 46 cents to $2 a day.

Endowed scholarships are crucial. "Ten thousand dollars," Salley explains, "endows a named scholarship in perpetuity. The $130,000-plus that I have provided assures that a student matriculates under the name of Marie and James Salley throughout the life of the institution. The interest earned from the gift is given as a scholarship to the students." The principal is never touched.

"Give what you have," Salley advises, "and trust God to provide the increase. Give from the heart and do the best you can. Give cheerfully because God loves a cheerful giver."