Advocating for peace and justice in the Holy Land

United Methodists for Kairos Response is dedicated to helping bring a just peace to the people of Israel and Palestine.

In 2008, Palestinian Christians published the Kairos Palestine Document, pleading with fellow Christians from around the world to assist them in opposing the Israeli occupation of Palestine. "We could not ignore their urgent call," said the Rev. John Wagner, founding member and co-chair of United Methodists for Kairos Response.

United Methodists for Kairos Response has more than 240 lay and clergy members from around the world who are answering the call to action. 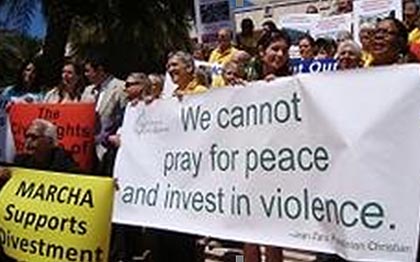 "We work to inform our fellow United Methodists about how we might live out these statements (in The Book of Resolutions, #6111) through what we buy, how we invest our money and how we speak to our elected political representatives. We believe that United Methodists can indeed change the world — in this case by becoming part of a growing movement to end the suppression of human rights in what is called the Holy Land," Wagner said.

In 2008, Wagner was asked to teach the United Methodist Women's school of mission sessions on Israel and Palestine. To learn more about the issues, he traveled to the area in a trip sponsored by the General Board of Global Ministries.

"Because I had many Jewish friends and had studied the Nazi Holocaust and visited Auschwitz as a young person, I initially felt the narrative presented on the GBGM tour was unbalanced in favor of the Palestinians. Because of that, I asked a lot of hard questions."

Eventually, he said, the reality of the situation became clear to him. "Our missionaries are telling the truth. The oppression of the Palestinian people by the Israeli government is undeniable. How could I not speak out after witnessing it?"

United Methodists for Kairos Response has worked closely with United Methodist agencies, annual conferences and leaders from around the church in its mission. Its work includes support for divestment and boycotts focused on ending the Israeli occupation of Palestinian territory.

Wespath Benefits and Investments (formerly the General Board of Pensions and Health Benefits) has removed or barred investments in several businesses, including five Israeli banks, in keeping with its plan to use a human rights guideline for investments. Wagner said acts like these help the church "live out its best intentions by putting words into actions."

The Peace with Justice Sunday offering, Wagner said, represents "something vital to authentic Christian witness: a willingness to directly address systemic injustice around the world.

"Our offerings of material and spiritual support to people in trouble are equally important, but without also engaging the powers that suppress basic human rights, we limit the Gospel message of hope and freedom for all people," he said.

United Methodists for Kairos Response urges church members and leaders, especially bishops, to go and see for themselves what is happening in the Holy Land. "Become a faithful witness on behalf of peace with justice. Join us!"

One of six churchwide Special Sundays with offerings of The United Methodist Church, Peace with Justice Sunday enables The United Methodist Church to have a voice in advocating for peace and justice through a broad spectrum of global programs. The special offering benefits peace with justice ministries in the annual conference and through the General Board of Church and Society.

When you give generously on Peace with Justice Sunday, you give The United Methodist Church a voice in advocating for global peace and justice. Give now.