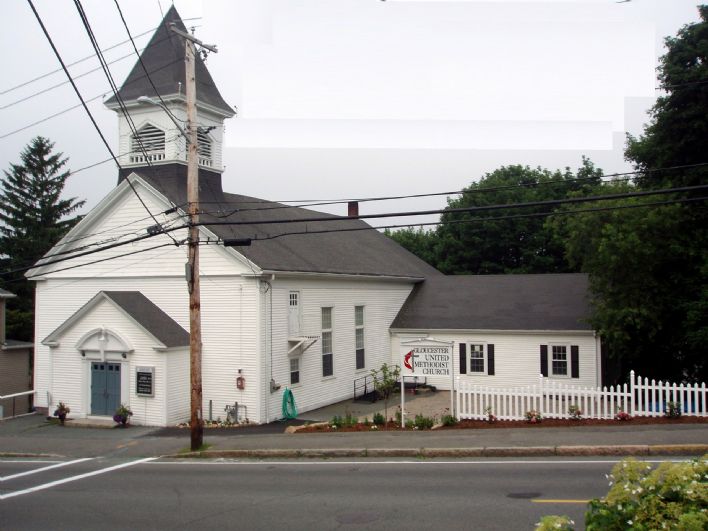 
Every Sunday morning at 9:15, residents of the Riverdale area of Gloucester hear the ringing of the bell -- made by Paul Revere and Son -- that warned Sandy Bay (Rockport) of an attack by the British in 1814:
On September 8, 1814, the British frigate Nymph invaded Sandy Bay. One of her barges surprised and captured the barracks at the end of Bearskin Neck; when the second was seen entering the Old Harbor, the meeting house bell sounded the alarm. The crew shot at the bell to silence it and hit the steeple instead. Firing a shot, the carronade went through the bottom of the barge,and the crew was captured as they swam ashore. Their captain effected an exchange of prisoners and promised not to bother the town any more.
This bell, cast in 1806, was purchased in 1838 from the Rockport Congregational Church for the new Riverdale Methodist Episcopal Church being built.  The bell that the British tried to silence has since heralded the beginning of services for the Riverdale church (now the Gloucester United Methodist Church) almost 170 years.

Do you ever ask these questions when you visit a new church?
Is God listening to me?
Are they just after my money?
Is there hope for me?
Will they make me help out?
Will they LET me serve?
Will these people accept me...and my children?
Will anyone pray with me?
Is there a place for my talent?
Do I have to dress up?

We are made up of all sorts of people who came seeking, by invitation or out of curiosity. We are people like yourself who have fished, who have returned from war, who have raised babies or maybe planning to. We are young and “young at heart”.
We are gifted; some with music, some with patience, some with vision, some with other gifts as well. We welcome new ideas and new members. We like to laugh, and are willing to cry, we are imperfect, but we are learning. That’s why we are here, expecting to be transformed and made whole by the love of Christ.

Little Dresses for Africa is a global mission providing dresses made out of pillowcases and fabric for girls worldwide. Our church has been involved in this mission for 4 years.<div> Our volunteers meet here at the church on the 1st and 3rd Sunday of each month too sew, laugh, and fellowship  as we join together in a common cause. All a welcome to join us, no experience needed</div>
Gloucester United Methodist Church
436 Washington St., Gloucester, MA 01930
1:30 PM INTERVAL=1;BYDAY=SA

Take Rt. 128 North to Exit 11, which is Grant Circle rotary. Go 3/4 around traffic circle and exit onto Rt. 127 North. Pass Addison Gilbert Hospital on left. Travel 1/2 mile to short causeway with water on both sides. The church is on the left, just beyond the causeway.

Through our faith and prayers, we reach out to those who are searching for Christ. Through our Fellowship Soup we reach out to those who are hungry for food and companionship. Our Mission trips allow us to reach beyond our community and into lives of those in need.
We do this as just as Christ our Savior did for others, just as God is our Master we listen as he speaks and do as he commands, all in the name of love.

Update Church
Back to top