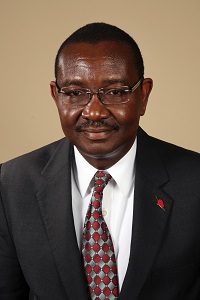 Oswald is a lay member of Monrovia, Liberia: S. T. Nagbe UMC where he was born.   He is chair of their building committee and has been on the Church Council, Advance Committee, and Trustees.  He is Managing Director of Pierre, Tweh & Associates in Monrovia where he was previously Managing Partner.  He has degrees from Louis Arthur Grimes School of Law in Liberia and Harvard Law School.  Oswald is a former Chancellor of the Liberia Annual Conference and is on the boards of United Methodist University of Monrovia, Ganta United Methodist Mission Hospital, and Africa University in Zimbabwe.  He is married to Olabunmi and has four children.