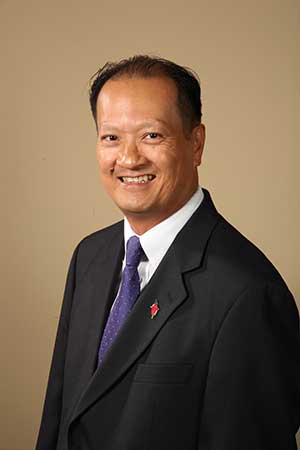 Born in Vietnam and raised in Switzerland, "Lui" worked as a lawyer for the Swiss Justice Department. He later answered God's call and became a missionary with Wycliffe Bible Translators working in Cameroon, Ghana, and Kenya. Lui is an elder and member of the California-Pacific Annual Conference where he has served as local church pastor for more than a decade. He serves on the Conference's Rules Committee and the Trustees of the Claremont School of Theology.  Lui is fluent in English, French, German, and Vietnamese. He has degrees from the University of Bern, Harvard Law School, Claremont School of Theology, and McGill University where he earned a Ph.D. with honors in international human rights law. Lui is married to Traci. They have two sons.