Piggery Expands During the Rainy Season

“We are in a piggery business. We initially bought twelve pigs and kept them temporarily here while we waited for the rains to cease,” Stella Bockarie, the Kono district women’s leader, explained to us, a United Methodist media team, as we were shown around the pigpens.

“It was the peak of the rainy season. But since the twelve pigs were not enough for the whole district, some other groups opted to farm and produce feed for the pigs. About four neighboring village communities opted to support the piggery with feed. They are growing beans, cassavas and potatoes.” 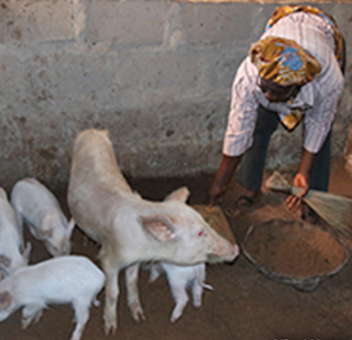 This is one of four recent projects to receive an economic development grant from United Methodist Women, the piggery in the Kono district in Sierra Leone, is expanding. “With their assurance and our shared hard work, we have now increased the number of pigs to 25 because we are sure of receiving their feed in the near future. Once the rainy season ends, the groups will come to pick up their share of pigs to take to their respective communities and rear them,” Bockerie reported.

Difficult Roads to Travel
“Certainly, the coronavirus affected our project. If it were not for COVID, the other pigs would not be sitting in our own pigpen. I should have distributed them ever since,” she said. Owing to the lockdowns and restrictions on movement, she was not able to deliver the pigs before the rainy season set in. Travel around the country even during normal times is difficult because of the harsh condition of the roads. The roads become worse in the rainy season and for some districts, like Kono, they become unpassable in the thick of the rainy season.

Asked about the viability of the project, she said there is a huge potential for growth because piggeries are lucrative businesses in the district. During our interview with Bockerie, the original mother pig delivered five piglets. There was a potential for expansion of the pigpen as more births of pigs were expected in the coming months.

Bockerie expressed gratitude for the economic development support received from United Methodist Women for this sustaining and expanding piggery project.